Here on Diane Capri Reveals, we’ve featured some of the biggest names in our genre, including my friends and colleagues Lee Child, the father of Rambo, David Morrell, this year’s Mystery Writers of America Grand Master, Margaret Maron, my colleague at the Bar, Steve Berry, dynamite writing duos Maxine Paetro (and James Patterson), Grant Blackwood (and James Rollins), and more. You can check out those posts by clicking HERE.

Readers love to discover new books. You’ve clamored for new authors and new voices as well as more from the giants in the field. In response to your requests for worthy tales to fill your empty e-reader devices, today on Licensed to Thrill we’re pleased to feature an author you’re going to love. (Leave a comment here on the blog because CJ West will send you a book to prove it!) 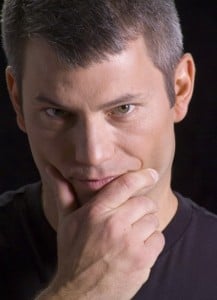 CJ West is the author of eight suspense novels including The End of Marking Time and The Winemaker’s Son, which was optioned into development for film by Beantown Productions, LLC (screenplay by Marla Cukor). Sounds great, doesn’t it?

CJ West is a lucky guy who writes seriously scary stuff. Which, of course, made me wonder why.

Diane Capri:  What was the scariest moment of your life? How did you deal with it?

Diane Capri: Let’s start with one.

CJ West: During hunting season several years ago. My brother, my father, and I were walking together along a trail in the woods. We were about five feet apart, carrying our shotguns when shots rang out in our direction.

Three or four twelve gauge shotguns blasted at us from about one hundred yards. The men were shooting semi-automatics and could fire successive shots as fast as they could pull the gun level. A single shotgun blast is menacing. When they come in your direction three at a time, there is only one thing to do. Hit the deck. I did.

Diane Capri: OMG! You’re lucky to be alive! What happened after the gunshots stopped?

CJ West: The three of us split up assuming that a deer was headed our way. My father stayed put. My brother went left. I went right. The deer ran to my brother, which is pretty much how my luck usually runs: lousy.

Diane Capri: Oh, come on! You didn’t get killed and you’re complaining about bad luck? Seriously? Okay. So tell us the second story, then. Surely it ends a little better?

CJ West: In an instant I went from standing still, to free fall out of a very tall tree.

Diane Capri: How in the world did that happen?

CJ West:  I was trimming tree branches before cutting down a large tree so I could better control where it fell. To get up into the high branches, I used a climbing tree stand which is like a see saw. When you press down, the tree stand holds your weight. When you lift up, the stand can be moved up and down the tree trunk. You climb by lifting up with your abs and adjusting the height of the platform.

As I was about to finish sawing through a very large branch, my kids came out to say hi. I talked to them for a minute from about thirty feet up and then went back sawing.

Diane Capri: Yikes! What happened next?

CJ West: In moments like this the world slows down and things seem to happen very slowly. In this instance, my vision went black and I don’t remember seeing anything.

The branch dragged the platform down, holding the opposite side so I couldn’t stop my descent. About fifteen feet down, I hugged the tree. The bark scraped the skin off my arms. One branch I had sawed off, sliced into me, opening a wide gash in my chest that required stitches.

Finally I stopped, climbed down and wiped the blood off with a towel before picking up my tools and going inside.

Diane Capri: Are you sure you’re not a psychopath or something? I mean, just wiped off your own blood from a gaping wound, lah-ti-dah?

CJ West: My youngest daughter was angry at me for days. My oldest still comments that I acted like nothing had happened. *shrugs* I don’t know. Maybe.

Diane Capri: Well, uh, good to know. Um. I’m a little afraid to ask, but what would we find under your bed? 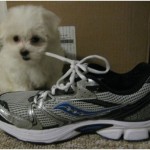 CJ West: *laughs* A few months ago I bought the cutest Maltese puppy named Mousebear for my daughter. Mousebear is adorable, but she has a nasty habit of pooping under the bed, and the couch, and any other place she can crawl under. I don’t know what her fascination is with hiding her poop, but at least she’s adorable.

Diane Capri: And tiny! You’d be in trouble if Mousebear was a great dane, wouldn’t you? How can you say you’re not lucky? Okay. Let’s talk about your books. You are writing a series, right? Tell us about that and your new release, The Cat Bagger’s Apprentice. 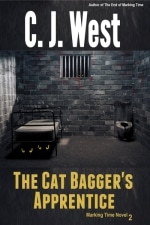 CJ West:  The Cat Bagger’s Apprentice, sequel to The End of Marking Time, scheduled for release on May 22.  I’m really excited about this book for the impact it has on readers. The End of Marking Time ends with a shock that really takes readers by surprise and makes them think. In The Cat Bagger’s Apprentice, I’ve managed the same sort of surprise in slightly different fashion.

The Marking Time series takes place in a world without prisons. Criminals are put into psychological treatment programs that monitor and challenge them to readjust to society. The juicy part of this series comes from the characters (and readers) not knowing illusion from reality and also the crafty psychological ploys the reeducators and relearners use against each other.

Diane Capri: Sounds like a very scary place to me. Congratulations! You also have some news on two more books, don’t you?

CJ West:  This is a great time for a photo reveal because this year I’ve started doing my own covers and today I can show off a few new ones. The first cover I designed is The Cat Bagger’s Apprentice (my latest release above). I’m renaming two of my older books and I have just finished the new covers in time for this reveal.

Aside from the lousy title, I wanted to change both titles and covers because lots of readers were getting these books confused with Christian fiction. The Winemaker’s Son is an intense revenge story and wouldn’t appeal to Christian fiction readers. Black Heart is a story of redemption that follows a spiritual search, but the story is not told in the style of a religious book. My hope is that the covers and titles are more consistent with what is inside. Drop me a note and let me know what you think of them.

Diane Capri:  Be sure to leave a comment here today and CJ will send you a free book! C.J. blogs at www.cjwestkills.wordpress.com. You can also find him at www.22wb.com or at www.facebook.com/cjwestfans

Thanks for joining us today, CJ West! It’s been fun!