By Diane on September 16, 2012 in Behind The Book, Blog, Diane Capri Reveals

There’s no nicer guy on the planet than my friend Lee Child. He’s kind, amusing, normal. What’s not to like?

You probably feel the same. He’s smiling and blue-eyed friendly in all those author photos, right? What we see is what we get with Lee Child: 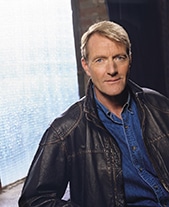 So I asked him if he wanted to be Revealed to Licensed to Thrill readers when his latest book was released. I figured we’d have a little fun, be a bit irreverent, maybe share some things about one of the world’s most beloved authors you didn’t already know.

I wasn’t nervous at all at first. That was dumb. Because I forgot one of Kim Otto’s first rules: You never see the bullet that gets you.

The first unheeded warning was when Lee sent me his self-portrait before our chat: 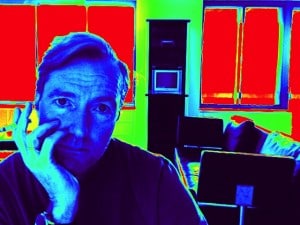 As a person who’s vertically challenged, I peered up through my binoculars and covered the most important point first.

Diane Capri: Someone recently described you as a lanky praying mantis. How tall are you, anyway? Ever wish you were shorter? I mean, don’t you get light-headed at that altitude?

Lee Child: I’m about ten inches tall when I’m lying down. About 6-4 when I’m standing up. Very thin, no matter how much I eat. I like being tall. Who wouldn’t? There are many completely unearned advantages. Like having an English accent – in America that’s 20 unearned IQ points, right there.

Diane Capri: Readers want to know some personal details about you that Charlie Rose didn’t ask. Let’s start with a few of those. Here’s an easy one. You were chewing gum when I saw you last in NYC and not hanging around the smoking sections. Have you quit smoking?

Lee Child: No, I’ll never quit smoking. I enjoy it. It’s one of my main pleasures in life. Every New Year I make the same resolution – keep on smoking. 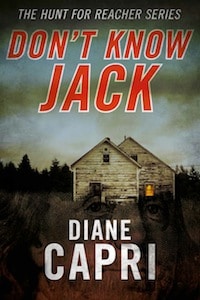 Diane Capri: You know Kim Otto is hunting for Reacher in Don’t Know Jack, and she’s more than a little worried that she might actually find him before she’s ready. She worries about Reacher’s facility for, um, solving problems. Your fans write, warning me not to disrespect Reacher because he’s one of the good guys. Clearly, Jack Reacher’s A Wanted Man — in more ways than one. That’s got to make you somewhat, well, let’s call it pleased. How does all this attention affect your life? Does your wife, Jane, still make you take out the trash and handle the broken toilets like a normal husband?

Lee Child: Oh, sure. I haul trash and fix things like any guy. I’m a qualified electrician, from backstage jobs in the theater. Also a qualified firefighter, for the same reason. Away from the hoopla, I live a completely normal life. 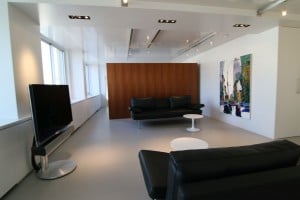 Diane Capri: Um, okay, thanks for sending along that picture of where you live….It fascinates me that your daughter, Ruth, has an amazing facility for languages. Did she inherit that from her parents? How many languages can she speak fluently? And what kind of work does one do with that talent, anyway?

Lee Child: Ruth speaks most of the European languages, and if there’s one she doesn’t, just wait a day or two until she masters it. It didn’t come from me or Jane. From my mother, possibly. Maybe it’s one of those things that skips a generation. My mother had a similar talent. Ruth works at NYC’s famous Gay and Lesbian Center, dealing with people who don’t speak English so good. She can do sign language too. And sign language for the blind.

Diane Capri: Like most writers, you read widely and love books. It’s astonishing that our Florida crime writers’ patron saint, Travis McGee, remained undiscovered to you until the mid-1990s, long after John D. McDonald died. Not surprising that you’re a fan and McGee has influenced your work, though. When you created Reacher, you avoided duplicating character traits that contemporary crime writers had already developed, but like you and McGee, Reacher is a tall dude. Does Reacher share any of McGee’s other traits? Do you?

Lee Child: Not really. McGee was pretty sure of himself. Reacher is professionally, as am I, but personally we’re a lot more diffident than old Travis. No grand pronouncements for either of us. 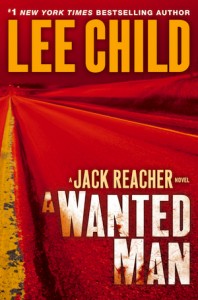 Diane Capri: We’re all looking forward to reading A Wanted Man, which just opened to raves from readers and critics and at the top of the best seller lists. This is Reacher’s 17th chance to get his butt kicked. Is that gonna happen?

Lee Child: He has a busted nose in this one, carried over from the last one. (Well, not the last one, which was a prequel. The one before.) It was a challenge not to write anything about smells. Normally I’m a five-senses-all-the-time writer.

Diane Capri: Many readers have already devoured A Wanted Man and wait hungrily for Reacher #18. They want to put the title on their wish lists. What is it?

Lee Child: It’s called “Never Go Back” – because Reacher goes back to his old unit HQ and falls into a world of trouble. 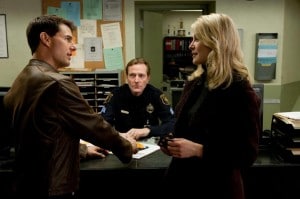 Lee Child: It’s a fast, hard movie, and Cruise nails it dead on. How? Because he’s a great actor. They do that stuff for a living. The rest of the cast is spectacular too. Altogether awesome. Plus it has a better car scene than Bullitt.

Diane Capri: When we put Reacher on trial for murder at the very first ThrillerFest, the still-to-be-revealed Kim Otto took Reacher on, sort of. Otto made darn sure everything went according to the law and Reacher still got off. But only because he cheated. Otto will be smarter next time they meet. Is Reacher worried?

Lee Child: Reacher didn’t cheat. It was jury nullification, pure and simple, because of his charm. Sure, he said with a smile, I killed the guy. Not guilty!

Diane Capri: Um, that’s a little unnerving, actually….For the first time ever, you’re headed to my summer town. I feel a bit like Kim Otto. She knows Reacher is watching her, and it’s a little creepy and she’s not all that thrilled about it. Of course, I’m looking forward to seeing you, but what brings you to Northern Michigan? Tell me straight. Are you stalking me?

Lee Child: Yes. Fortunately for me there’s a great author event there, for cover. Be afraid.

He said that with a smile.

Remember to enter our contest for a chance to win autographed copies of A Wanted Man and Don’t Know Jack. Enter as often as you like. Click Here: WIN! DON’T KNOW JACK & A WANTED MAN BETTER TOGETHER