What do Sylvester Stallone and Diane Capri have in common? More than you might think. Give up? Here’s a hint: 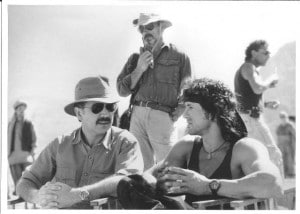 Another hint? Okay – How many women have been serenaded on stage in front of hundreds of people by one of the most iconic characters of the past 50 years, Rambo‘s father? At least one. That’s my story and I’ve got witnesses to prove it.

That night, David had a terrible case of laryngitis. To me, he sounded as good as that other Canadian crooner, Michael Buble. What do you think?

Now, I’d have said all of those nice things and more about David even if I didn’t know how proficient he is in, um, action skills. (What? You thought Rambo was a fictional character? You’ve never heard that authors write what they know?) But I’m a brave woman. You know this because you’ve read my books, right?

Diane Capri: Ahem, er, Mr. Morrell. Sir? Writers dream of launching a rocket like John Rambo into literary history and popular culture. Rambo’s name is instantly recognized and used descriptively. (Such as “Rambo Litigators” in the legal world.) And not long ago, a charming coming of age film called Son of Rambow, brought the Rambo saga full circle I guess. When you were working on First Blood nights and weekends while in graduate school at Penn State, did you imagine Rambo’s success would thrive and influence us for decades?

David Morrell: It’s impossible to predict that kind of impact. Forty years later, I’m still amazed that Rambo is one of five thriller characters in the 20th century who are recognized around the world: in chronological order, Sherlock Holmes, Tarzan, James Bond, Rambo, and Harry Potter. Rambo’s name was painted on the Berlin Wall after the fall of the Soviet empire. When I was on tour in Poland, Polish journalists told me that during the Solidarity demonstrations, Rambo films were illegal in Poland, but videotapes were smuggled in, and demonstrators watched the films, then put Rambo sweatbands around their foreheads and went out to confront the military. One of the Polish journalists said that in an indirect way Rambo helped bring down the USSR. The character’s name is in the Oxford English Dictionary. I recently heard from an astro-physicist that a powerful cluster of dead stars is called a RAMBO. When I was writing FIRST BLOOD from 1968-71, no one could have predicted any of that. 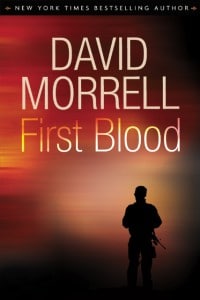 Diane Capri: Did you begin honing your action skills like using weaponry and firearms or executive protection while writing Rambo, or did that come later? What’s the most dangerous action skill you’ve mastered so far?

David Morrell: I signed up for a pistol and rifle course when I was writing FIRST BLOOD. As a graduate student at Penn State, I helped pay for my tuition by teaching composition classes. Several of my students were returned Vietnam veterans with what we now call post-traumatic stress disorder. I learned a lot from them. I also spent weekends with hunters who went into the Pennsylvania mountains. I didn’t hunt. What I wanted was a sense of working through the terrain. One major scene in the novel, about a hillside of brambles into which the police chief crawls to escape Rambo, came from something I encountered on those expeditions. For a later book, TESTAMENT, I took a wilderness survival course from the National Outdoor Leadership School and lived for thirty days in the Wind River Mountains of Wyoming. I spent 5 days learning how to car-fight at the Bill Scott Raceway in West Virginia. I acquired a private pilot’s license for the aerial scenes in THE SHIMMER. Those were all fun. The dangerous—or at least punishing—research involved learning defense against knifes. It was very physical. At the end of the first day, I was bruised from head to foot. In the middle of the second day, I broke my collarbone.

Diane Capri: Recently, you’ve become an indie publisher, like me and many of our colleagues. Your first indie book is The Naked Edge. Awesome cover, by the way. Tell us why you’ve moved to indie for these projects and what’s happening there? 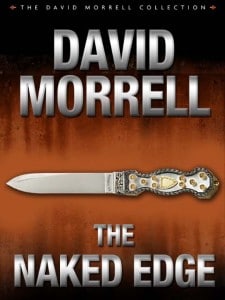 David Morrell: Thanks about the cover. The knife is a replica of a Michael Price knife that was made in the 1850s in San Francisco during the Gold Rush days. People had so much money that they told knife makers to put gold on the handles of their knives. The replica is by my friend Gil Hibben who designed the knives for the third and fourth Rambo films.

THE NAKED EDGE was released two years ago, in 2010, during a different kind of Gold Rush involving e-books. The format was still very new, and few people realized how rapidly e-books would become a force in publishing. Amazon came to my agent Jane Dystel and asked if I’d be interested in releasing 10 of my backlist titles as e-books. This is my 40th year as an author, and the majority of my books were published before electronic rights were included in contracts, so I didn’t have any legal hurtles. I’ve always tried to be forward-thinking, and as an experiment, I not only agreed but suggested that a brand-new novel THE NAKED EDGE be included. This sounds ordinary now, but when THE NAKED EDGE came out, no established author had released an original novel exclusively as an e-book. Several of my author friends warned me, “You’re making a mistake.” The news was dramatic enough that the LA Times featured it below the fold on its front page. How times have changed. The downside of self-publishing e-books is that self-marketing takes a lot of time, as Amanda Hocking indicated when she went to St. Martins.

We can debate whether it’s better to have a legacy publisher prepare a cover and arrange for editing and handle publicity for a new novel—as opposed to doing it ourselves. But when it comes to backlist titles that an author controls, there isn’t a choice. Traditional publishers seldom want to reprint backlist titles. To keep those titles available, authors need to assume control. In addition to all the novels I was able to give new life, I’ve also been offering e-stories and e-essays that I wrote over 40 years as part of what I call The David Morrell Fiction (or Non-Fiction) E-Collection. One on RAMBO, Another in JOHN WAYNE: THE WESTERNS, both of which will soon be available. This is another way in which e-publishing gives freedom to authors. There’s no other way to make individual stories and essays available.

Another point: when editors say that a manuscript doesn’t suit their present needs, they’re telling the truth in terms of how they see the marketplace. But that doesn’t mean a manuscript isn’t worth reading. I’ve never been more optimistic about authors being able to write the books they truly want to create. If traditional publication fails, those from-the-heart books will always find a home as e-books. 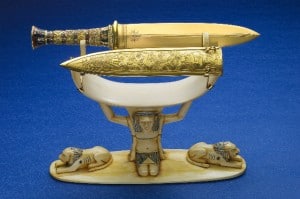 Finally e-books allow us to experiment. THE NAKED EDGE has a character who loves to talk about fine-art knives of the sort that’s shown on the cover. I thought it would be fun to add an appendix that contains photographs for eighteen of those knives, something that would have been impossible in a printed book. Here’s one for the most expensive knife in the world, a solid-gold replica of King Tut’s dagger. It took six years to create and is valued at a million dollars. For the novel, I had fun with a tagline that said, “The most expensive knife in the world is the one that costs you your life.”

Diane Capri: You’ve really done it all by now. Books, short stories, films, and all the adventures necessary to your signature realism. What’s still on the horizon for David Morrell?

David Morrell: In 2013, my new novel MURDER AS A FINE ART will be published by Mulholland Books/Little Brown. (Yep, I’m working with a traditional publisher again because editor John Schoenfelder is there, and our discussions really charge my imagination.) The book is set in 1854 London and is a hair-raiser. For a year, everything I read was related to Lon don and 1854. One of my goals is to make readers truly believe they are on London’s streets at that time. It’s so foreign that going to it is like going to Mars. You need a guided your, and that’s what the narrator does, stepping in to explain what’s taken for granted in Victorian novels but which is baffling to us now. For example, how much did a middle-class woman’s clothes weigh? Thirty-seven pounds, taking into account ten yards of satin. When I told our friend Steve Berry about the nature of the book, he chuckled and said, “You reinvented yourself again.” In a forty-year career, that’s important. Careers tend to end after 15 years if an author isn’t interested in trying new things. (Hey – why aren’t you revealing Steve?)

Diane Capri: (I am – in May, stay tuned!) I see you’ve got 4,339 fans besides me on your Facebook page. What do you think about instant feedback from readers here in the digital age?

David Morrell: At first I resisted being part of Facebook because a lot of authors use it as a mere selling tool or else people talk about whether it’s raining in their area. But then I remembered how much I enjoyed teaching at the University of Iowa, and I decided to make my Facebook page a seminar about popular culture. Books, movies, music, television, publishing. People visit my page to get information and to have a fun discussion about creative topics. When the Coen Brothers version of TRUE GRIT was released, we devoted a week to it. Two days on the wonderful Charles Portis novel. Two days on the John Wayne film. Two days on the Coen Brothers remake. And a day on Calvinism as a literary theme and as the driving force in the book and films. Where else on Facebook can you get that? Great fun. I visit my Facebook three times a day and try to have a genuine conversation with readers interested in my work. The accessibility is amazing.

Diane Capri: In closing, can you give us a fun fact.  Is it true you almost called the guy John Reacher? Okay, okay, I can see you think I Don’t Know Jack.

David Morrell: *laughs* And why aren’t you revealing our friend Lee Child?

Diane Capri: *laughs* Like I said, stay tuned. So how did you come up with that iconic character name, anyway? 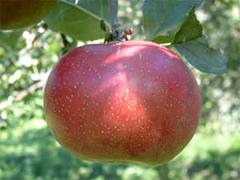 David Morrell: Rambo is named after an apple. In 1968, when I started writing FIRST BLOOD, I was struggling to find a name for the character. My wife came home from buying apples at a roadside stand. I bit into the apple (I love the symbolism), enjoyed the taste, and asked what the apple was called. She told me, “Rambo.” It’s a popular apple in central Pennsylvania where we then lived. I rushed toward my typewriter.

If you’d like to be David Morrell’s friend, join him on Facebook or check out his impressive list of great books. Who knows? Maybe someday Rambo’s father will serenade you!

Readers Ask: What Are You Writing Now?
New Short Story: Jack In A Box (the Hunt For Reacher Series)