New Short Story: Jack In A Box (the Hunt For Reacher Series)

By Diane on March 24, 2012 in Behind The Book, Blog
The Hunt for Jack Reacher Continues
in
Diane Capri’s new short story:
Jack In A Box
Now Available

Lee Child, #1 New York Times Bestselling Author of Jack Reacher Thrillers says:
“Full of thrills and tension, but smart and human, too. Kim Otto is a great, great character — I love her.”

First, we want to thank you for reading and reviewing the first book in our new series,  Don’t Know Jack. Thanks to you, Don’t Know Jack hit #31 on the Kindle Bestseller List and #1 on several Amazon Bestseller lists, which was quite a feat. Your response to the book and to FBI Special Agents Kim Otto and Carlos Gaspar has been overwhelmingly positive. We’re so glad you’ve enjoyed our vision for another perspective on the Jack Reacher tales. Thank you for writing to let us know and for “liking” and reviewing the book on Amazon and Goodreads and other locations to help us get the word out to readers and keep the series going.

If you haven’t had an opportunity to do so, you can check out what other readers are saying about our Hunt For Reacher Series if you click here to: Buy or Sample Don’t Know Jack

As many of you know, because of readers like you, the bestselling book on both sides of the Atlantic in the fall was Lee Child’s latest The Affair and it goes on sale in paperback March 27. Lee wrotea thank you note recently including his upcoming news.  If you didn’t see it, you can click here for his Reacher Report. If you haven’t had a chance to read about the incident that set Reacher off on the path we readers love yet, you can click here to sample, download or pre-order The Affair. 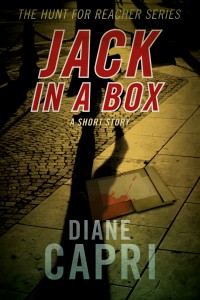 Also available now is a new entry in the Hunt For Reacher Series. This one is Jack In A Box (short story).

In the tradition of Lee Child’s Second Son,  Jack In A Box reveals more about FBI Agents Kim Otto and Carlos Gaspar and continues the themes we began in Don’t Know Jack.

FBI Special Agents Kim Otto and Carlos Gaspar have received a special off-the-books assignment: build a secret file on Jack Reacher. In this short story, Otto and Gaspar reveal a bit of themselves as they make every effort to put Jack in a Box. Reacher fans know that no one boxes with Jack and lives to tell about it. Will Otto and Gaspar be the first to succeed where so many have failed?

Here’s a sample of a few of your comments about Don’t Know Jack:

“After reading your last story, I can hardly wait to meet back up with your characters.” M.A.

“I just finished Don’t Know Jack and can’t wait to get the next book.” K.P.

“Great authors are rare, and this book makes me want to read more of Diane Capri’s books. I hope she will keep searching for Jack and taking us along for the ride.” N.

“A great book which I couldn’t put down. Getting hold of your backlist and looking forward to new books as they come along. Are you sure you’re not Lee Child in disguise?” I.W.

We hope you’ll try Jack In A Box, my new Kindle suspense story. (That’s right. Jack In A Box is only available as a Kindle eBook for $1.99. Don’t have a Kindle? No problem. You can read Jack In A Box on any device or computer. Instructions HERE.)

I hope you enjoy this new installment of the Hunt For Reacher series. Please be sure to let us know what you think. And thanks again for reading!

Want to hear more from Diane?

Subscribe to my blog and e-mailing list and get a FREE ebook copy of the short story Darla’s Deceit. Get behind the book info and more. And we’ll keep you up to date with infrequent e-mails announcing free promotions, new books, and appearances. Don’t miss out, Subscribe Today!

Diane Capri is the bestselling author of six prior novels and a recovering lawyer. Diane says she writes mystery and suspense for the same reason she reads: to find out what happens, why people do what they do and to restore order to an unjust world. Diane’s readers say her books emphasize everywoman’s inherent strength and self-reliance. Diane’s books are translated in multiple languages. She and her husband are snowbirds who divide their time between Michigan and Florida. Diane loves to hear from readers. Connect with her on the web: http://DianeCapri.com

Click here: Buy or Sample Don’t Know Jack  and Jack In A Box

“Swift pacing and ongoing suspense are always present…Willa is a likable protagonist who uses her political connections for a good cause…Readers should eagerly anticipate the next [book].” Top Pick – Romantic Times

Click here: Buy or Sample Don’t Know Jack  and Jack In A Box

Four Judge Wilhelmina Carson Cases, and two Jennifer Lane Cases are also now available as e-books on Amazon Kindle. Click each cover to buy or download a sample. Or click for  More information.

10 Responses to New Short Story: Jack In A Box (the Hunt For Reacher Series)