Nearly half a million people crowded into one edge of one city all at the same time? It sounds like a security nightmare, doesn’t it? But that’s what happens each year at Tampa’s Gasparilla parade — an invasion of the pirates.

The invasion kicks off my book Secret Justice. You can read more about my take on Gasparilla and the events of Tampa’s Gasparilla month long pirate party HERE and HERE. 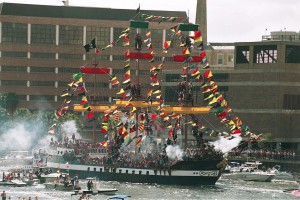 Think of Gasparilla like Mardi Gras, but with a pirate theme, the entire parade route runs along the water’s edge, and men dressed in pirate costumes throw beads and drink rum. It could be a recipe for disaster… so police have always had a strong presence there and have always done a fine job of wrangling the drunken pirates.

Except in my books, of course! As far as I know, Secret Justice is the only place you’ll find a murder during any Gasparilla event – and that pirate had it coming!

How would you go about protecting people at a public event like this, at a time like this? 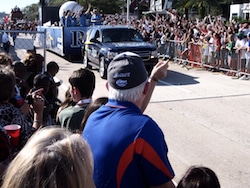 Tampa Police recently announced their security approach this year and you can read the entire press release HERE:

I think #5 is clever. Suppose we’d had #5 in place when the events surrounding the Secret Justice murder took place? The book would have been a lot shorter, maybe. But would our killer or any of the drunken pirates have noticed? What do you think?