I’ve never been to Spain, but since 1904 my neighborhood has been invaded annually by Spanish pirates. If you’re not afraid of pirates, perhaps you will be if you are among the 300,000 people who accept their invitation to join them this year. 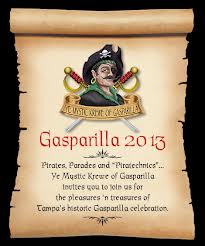 The annual Gasparilla Pirate Invasion and Parade event can get wilder than normal folks around here appreciate. We’ve seen many a temper flare among the landlubbers as well as the pirates themselves. Along with the fun, there’s always dozens of arrests for disorderly conduct.

As far as I know, we’ve never had an actual murder during Gasparilla, but have you read Secret Justice? If so, you may recognize this scene:

A few years ago, the big parade became too much for the kids. Changes were made. Today, Gasparilla Season begins innocently enough with the Children’s Parade. Kids and their adult supervision have been headed down to the Bayshore for a few hours to get the best seats. The weather’s good today and families should have a great experience.

Tonight concludes with the Piratechnic Extravaganza where you’re likely to see fireworks like these instead of the ones you’ll find in my book, Secret Justice. 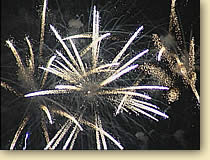 Or will you become immersed in Secret Justice instead? Here’s how it starts:

The supervisor pushed the pirate hard with his boot. The man’s head lolled over loosely, revealing a grey-blonde ponytail bound at the base of his skull with a limp, wet ribbon. Even in the weak ambient light, they could both see the bloody depression in the man’s skull where it had been resting on the heavy piece of concrete jutting up out of the sidewalk.

“Miguel, this man is dead,” the supervisor shouted. “Who is this guy?”

Frightened now, Miguel shook his head and lifted both hands, palms up. “I don’t know. I found him here. I don’t know.”

The police labeled him “John Doe” and sent him off to the morgue.

Then what happens? It wouldn’t be fair for me to tell you that, would it?

We’ll be talking about Gasparilla a bit more as the festival unfolds. Do come back to join us. If you’ve been to Gasparilla, what was the craziest thing you witnessed there? Besides pirates invading our city, I mean.

Meanwhile, have you voted to choose the title to my next book? If not, please do! I could use the help. And of course we’ll need a prize for doing this heavy lifting, right? How about an autographed, newly minted copy of the paperback version of Fatal Distraction or Don’t Know Jack? Winner’s choice. Name That Book by CLICKING HERE!

Folks, you already know I love to hear from you! I see everything you send to me and reply as soon as I can. No exceptions! If I don’t respond to your e-mail within 10 days, let me hear about it!

Four fastest ways to reach me? Leave comments below this post.Join me on Facebook or Twitter:  or send me an e-mail using the form here: E-mail Contact

p.s. We have quite a bit of news coming up over the next few months and we don’t want to leave you out!Subscribe to my Licensed to Thrill blog and collect your free e-Book as our special thank you present for doing so. You’ll find the sign up in the right side-bar below my photo here: Blog  If you’re on our announcement list, we’ll send you infrequent e-mails letting you know when we release new books, offer free books, and share other fun stuff. You can sign up here: Capri Crowd Announcement List

p.p.s. Have you seen the new paperback versions of Don’t Know Jack and Fatal Distraction? They look terrific, don’t they? Our new paperback publisher, Stonehouse Ink, has done a fantastic job. They’ll be issuing all of my books in paperback. For those of you who are looking for hard copies instead of e-versions, and even library copies, we’re very excited to bring them to you soon! Also, if you have new e-readers or friends with e-readers other than Kindle, all of my books are now available on KOBO, Nook, and yes — iTunes!

Due Justice And Jack Reacher’s Revenge – We Want You!
Trapped In Paradise With No Way Out