The Hunt For Justice Series #3* 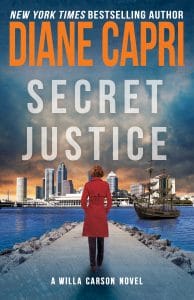 Just as Willa is recovering from the shock of meeting her father’s new trophy wife, her secretary Margaret Wheaton becomes mysteriously involved with a nefarious jeweler. When both Margaret’s husband and the jeweler end up dead, Margaret is the number one suspect. Judge Willa sets out to prove Margaret innocent and takes the reader on a ride through Tampa’s month-long pirate party, with twists and turns that keep you guessing until the very end: whodunnit?