One of the best things about the internet is how it allows us to connect with delightful people who live in distant lands. Such is the case with the refreshing and fun CC MacKenzie, today’s victim, er, guest here at Diane Capri Reveals. Her blog posts at Romance With Fizz & Fangs often make me laugh out loud. Christine Claire MacKenzie lives in South Cheshire, United Kingdom. She has two daughters and one son. If you haven’t met CC, you’re in for a treat. Just look at this mug shot. She looks like mischievous trouble, doesn’t she? 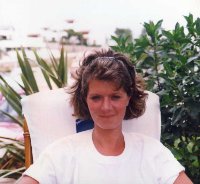 Diane Capri: *laughs* See what I mean? Scrappy, to be sure. Before we get too far into this, I want readers here to know that CC was one of the most generous contributors several weeks back to the Buy Books for Steve bone marrow transplant fund raiser. CC didn’t know Steve Brown. She doesn’t write mystery or thriller or suspense, which are the genres Mystery Writers of America supports. Nor was she a member of our Florida MWA Chapter, as Steve and his good friend, Jeffrey Phillips are. But when CC heard Steve Brown needed help, she was one of the first to raise her hand. CC’s generous support was greatly appreciated then and not likely to be soon forgotten. For many reasons, I’m thrilled to feature CC MacKenzie — But mostly because she tells me she’s willing to do dishes!

Diane Capri: Works for me.  Well, your books are getting a lot of buzz and raves from readers.  A born storyteller, CC MacKenzie creates a fast paced blend of humour, poignancy and a deep sensual warmth that speaks directly to her readers. About Reckless Nights in Rome, one reader said,  “CC MacKenzie can write a sex scene like no other. She even beats out JD Robb (Sorry, Nora). Hot and sensual, and well *stops to fan face* did I mention hot?” Tell us about your latest.

CC MacKenzie: My contemporary romance is out now – A Stormy Spring features an award winning choreographer haunted by personal tragedy and a charismatic PR Guru. Think Flashdance meets PS I Love You. Music was her life, choreography her only passion. Becca had buried her heart with the love of her life, but when she spends a scorching night with a gorgeous Spaniard the lonely dancer finds there’s a price to pay to a man who refuses to take no for an answer.

Diane Capri: Wow! *blushing* And then what’s next?

CC MacKenzie: Run Rosie Run is book three in the Ludlow Hall series and will be out on November 26, 2012.  Think Easy Virtue meets No Reservations. She’d wasted enough of her life madly in love with a man she could never have. Perhaps it was time to give another man a chance. But now Rosie has two men who want her and will stop at nothing to win her heart. Which one will she choose?

Diane Capri: You write so passionately! Like you do everything else. In fact, I’d known you for a long time before I found out you are a breast cancer survivor. What a strong person you are! What is the story with this photo? 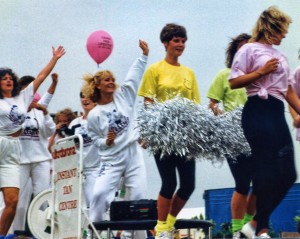 CC MacKenzie: *laughs* I really believe that life is not a dress rehearsal. We can’t go back and do it again if we get it wrong. I took to heart the advice to live my life as if each day is the last.

Diane Capri: Good for you! And what’s next, after Rosie?

CC MacKenzie: The big project I’ve been working on for four years – futuristic paranormal set in an urban future with Vampyres, witches, magic and alternative realities. Humans have been decimated by a swine/avian flu pandemic. A pharmaceutical company run by a Vampyre has come up with a vaccine and saved what is left of mankind. The earth’s polarity is shifting triggering natural disaster on an epic scale. Add in a love story that spans the series and a conspiracy to destroy our world. I think that might be enough! *Laughing*

Diane Capri: Me, too. Okay, and who is this lovely lady? Is that you, having lunch with the Vampyres? 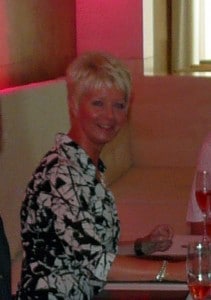 CC MacKenzie:  I’m following the writing advice that changed my work for ever. “Enter a scene late and leave it early!” Doesn’t get any better than that. Thank you very much for having me, Diane. You’re a wonderful woman.

Diane Capri:Thanks for coming by to chat with us today, CC. And if you’d like to connect with CC MacKenzie you can find her at her blog:  http://ccmackenzie.wordpress.com/  Or on Facebook: http://www.facebook.com/CCMzie