By Diane on November 8, 2012 in Blog, Diane Capri Reveals

Certainly one of the most delightful authors I’ve met this year is Melinda VanLone. You may not know her yet, but you will. Notice the mischievous twinkle in her eye and imagine her infectious laugh. You’re going to love her. 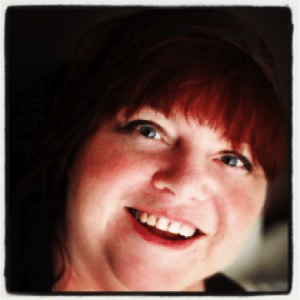 Diane Capri: So I’ve heard you can be a bit indecisive. True or False?

Melinda VanLone: *laughs* In college, I changed my major seven times. I tried music therapy, psychology, broadcast journalism, astronomy (before I figured out how much math would be involved), another one I can’t recall, and a very, very brief run at theater, before landing on English. I had no idea what I wanted to do with my life, and no idea where an English degree would take me. At the time, it took me to a secretary job I hated. So I went back to school at Syracuse University, where I met my husband and graduated with a degree in Publishing. I turned that degree into a 15 year career in graphic arts. While I love a lot of things about the field, it didn’t feel right. I felt like my career was slowly killing my spirit. That’s when my wonderful husband suggested I quit, and work full time on being a writer. It’s something I’d dreamed about over the years but never pursued.

Diane Capri: How are you finding the change?

Melinda VanLone: Because of my husband’s support, and that of my family and friends, I’m happier than I’ve ever been. Now I know exactly what to do with that English degree. Plus, I get to indulge my passion for photography and design and have it all feed into the writing. At the very least I can say I’m still using that degree I paid for!

Diane Capri: Before we get to that, I can’t help but say that maybe your graphic arts career was trying to kill your spirit, but it’s obvious that didn’t happen. You’ve got more spirit than most of us! Your eye for all the photographic subjects we’ve used in this post and that graphic arts career resulted in this gorgeous cover for your first novel releasing in December, Stronger than Magic. 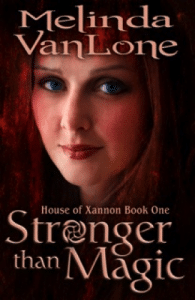 Melinda VanLone: Thanks! I’m very happy with the way it turned out, but it was a bit of a struggle to get it there. Like any designer, or writer for that matter, I spent a lot of time with this cover tweaking, revising, and trying to get everything exactly right. I’m lucky I have a beautiful and creative friends to help me out. My cover model is a dear friend, as is the photographer who took the picture. I’ll be revealing more about how the cover was built, the actual nuts and bolts behind-the-scenes look, on my blog. What was most important was to capture the spirit of the main character, Tarian. I hope I’ve done that. She’s confident, stubborn, strong and a fierce protector of her family. When a demon threatens not only her life, but the lives of her family and friends as well, she doesn’t hesitate to put herself in the way to track him down and eliminate him. Of course, it doesn’t turn out as easy as all that. Especially when she finds out she can’t use her own tracking ability without handing her magic over to the demon.

Diane Capri: Sounds like maybe you’ve been fighting a few imaginary demons. Anything to do with this? 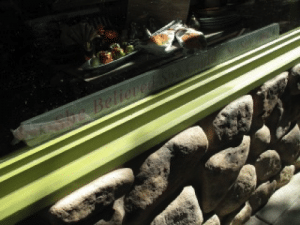 Melinda VanLone: This isn’t the greatest photo in the world, but it speaks to me for a few reasons. I took this on the street, looking in on a little shop down the street from our new apartment in Rockville, MD. It’s a new beginning, for both my husband and I. As I stood on the street I realized how many things were changing, and how excited I was to be at the precipice looking out over What Could Be. I haven’t felt that way since college. I think, if I ever finish unpacking, that I’m going to buy that sign in the window and put it above my computer to remind myself that if you can believe it, you can achieve it. I hope people will say that about me in December when I launch my debut novel Stronger Than Magic. “She believed she could, so she did.” The other really awesome thing about this area is the fall leaves! I can’t get enough of them, probably because I don’t have to rake them. But look, aren’t they stunning? 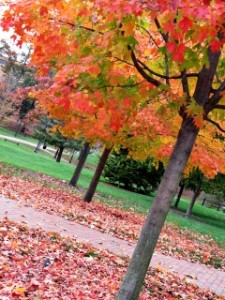 Diane Capri: I don’t know….I’m a Florida girl. To me this photo says “Yikes! Winter’s Coming!” When did believing you wanted to be a writer begin with you?

Melinda VanLone: I’m not sure it was an all-at-once sort of experience. In high school, I wrote a short story that involved a family of alcoholic beverages that made my teacher laugh. I got an A+, and a note at the top that said, “You should be a writer. I hope you will major in English in college.” I thought… because of that silly story? How odd. But I remembered her words, and when I finally settled on a major in college it was, indeed, English. I loved reading. It was more like an obsession than a passion. Gradually I came to realize that it was just as much fun to create the story as it was to read it.

Diane Capri: Maybe more, actually. *grins* We can see you’re a dreamer, for sure. You’re the kind of girl who jumps right in, aren’t you? Do your dreams include travel, perhaps? 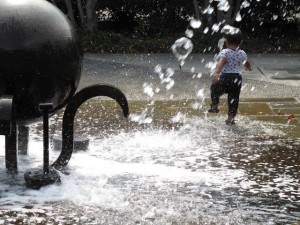 Melinda VanLone: I’d really love to travel to Ireland, Scotland, and France. I’ve never been to Europe, and those places in particular have always pulled at my imagination. The folklore and stories from those regions feature pretty strongly in my love of all things magical. Plus, I’ve always loved lush, green, leafy scenery. Probably because I spent a lot of time in my childhood in the Southwest, where the nearest thing to lush, green scenery was the tumbleweeds.

Diane Capri: Some of that wanderlust is revealed in your writing, isn’t it?

Melinda VanLone: Oh yes. The stories I write all tend to be placed, at least in part, somewhere I’ve been before. For example, in Stronger Than Magic, the majority of the story takes place either in Philadelphia, where we lived for two years, or Hawaii, where we visited on a long vacation. Both places sparked story ideas that made their way into the final overall narrative. And with good reason… who wouldn’t be inspired looking out over the islands of Hawaii?

Diane Capri: You are one of those annoying larks, aren’t you?

Melinda VanLone: *laughs* Very definitely a morning person! I’m the type that wakes up “bright eyes and bushy tailed.” I’ve never needed coffee to wake up, and I’m almost always in a good mood when I wake up. By evening, I’m tired and more than a little cranky. And no matter what time I go to bed, I wake up with the sun. 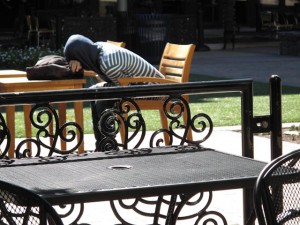 Diane Capri: You know how we night owls feel about that, right?

Melinda VanLone: Oh yes, I know exactly, because my husband is a night owl. It makes for interesting times around our house!

Diane Capri: Once we finally get awake, say noonish or so, where are we most likely to find you? 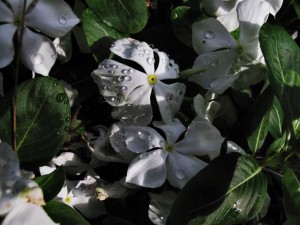 Melinda VanLone:  These days, Starbucks, the square by our apartment, or the library across the street, or, if it’s nice out, an arboretum. I love gardens, as long as someone else is taking care of them!

Diane Capri: Well, that’s something we have in common, for sure! That and Dove Dark Chocolate, hmmmm?

Melinda VanLone:  *laughs* How’d you know? I am addicted to Dove Dark Chocolate! It’s the only candy I have a true craving for. I let the small square from heaven melt on my tongue until it dissolves into nothing, usually with my eyes closed. Pure bliss.

Diane Capri: Okay, one more thing before we let you go. You’re an urban fantasy and science fiction writer. And you’ve got some imagination to go with it! So if you could exchange lives with any fictional character for a day, who would it be?

Melinda VanLone: There are so many! I think I’d love to be Lara Croft for one day. To be able to kick butt and look that great doing it would be fun!

Diane Capri: Thank you, Melinda, for being with us and we’re excited about your debut novel, Stronger Than Magic. Connect with Melinda and find out when you can grab a copy of her book on her website: MelindaVan.com  or connect with her on Facebook: Facebook.com/Melinda.Van