Who is Jake Reacher?

Who is Jake Reacher?

As promised, I thought I’d take this opportunity to tell you a bit more about Jack of Spades.

The eighth novel  (eleventh book) in my Hunt for Jack Reacher Series Jack of Spades is available now!

If you haven’t placed your order for Jack of Spades yet, I put the links below so you can one-click to the retailer of your choice. 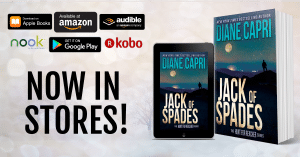 Buy the Paperback or Hardcover: Amazon

Buy the Paperback or Hardcover: BookDepository

Buy the eBook or Paperback: Walmart

So who is Jake Reacher? For that matter, who are David Reacher, Margaret Reacher, Mark Reacher,  and Old Man Reacher?

As I mentioned last time, our source book is Lee Child’s Past Tense. (Click Here: Buy Past Tense!) Jack Reacher set off to find his father’s birthplace and he found a lot more trouble than he was looking for.

One thing Jack Reacher found was his roots. Turns out there were more Reachers in that neck of the woods than Jack had anticipated. He didn’t meet Jake Reacher, but if he had, he’d have felt he was looking in a mirror.

One thing that fascinates me is the never ending question: nature or nurture?

Have you ever wondered what Jack Reacher might have been like if he’d had a different childhood? If he’d grown up inside the US instead of on military bases around the world? If both parents had raised him in a more stable environment?

In other words, is Jack Reacher a product of his environment or his genes? Or maybe a little of both?

I wondered that, too.

Jake Reacher is the first time I’ve added a new major point of view character to one of my Hunt for Jack Reacher series books, and I have to say it was a lot of fun for me. I hope you’ll love the way Jake’s story turned out.

As you know, Carlos Gaspar retired at the end of Ten Two Jack and for the moment, FBI Special Agent Kim Otto is flying solo. She finds Jake Reacher, the perfect bait to lure Jack Reacher in this gripping new suspense thriller.

When the bad guys will stop at nothing to get what they want, Agent Otto bets on Reacher and puts her life on the line. But she’s been wrong about Reacher before. Will he show up when she needs him most?

Get your copy of Jack of Spades to find out! (And be sure to tell me what you think!)

Oh — and I should mention that you can order the print copies of all my books “world wide” with “free shipping” from BookDepository.com, finally!

Who Owns Your Vehicle?
Are You Ready To Stock Up On Summer Reads?

One Response to Who is Jake Reacher?