The Hunt for Jack Reacher Series #10 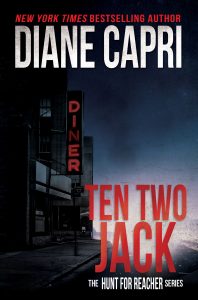 FBI Agents Otto and Gaspar pick up where Lee Child’s The Midnight Line leaves off in the Hunt for Jack Reacher.

FBI Special Agent Kim Otto’s search for Reacher takes a deadly turn when she’s forced to handle the fallout from Lee Child’s The Midnight Line — and gets caught in the crossfire.

Reacher set out to do a good deed for an Army officer in The Midnight Line.

The road to hell is paved with good intentions.

Now, five people are missing and one is dead.

But when Reacher’s enemies hunt his friends, someone has to pay.

An exciting chase from Detroit to Chicago to Houston and deep into Mexico where FBI Special Agent Kim Otto fights to the death in the gripping conclusion.

And Jack Reacher could be there when she needs him.

Start reading now and you’ll be glued to the page. But lock the doors first. This one’s a nail biter.

Buy the Audiobook: Audible US and UK