ARE YOU A MISSING PERSON?

Seriously. You could be a missing person and not even know it. Any of us could be.

As you know, stories about missing people fascinate me. I’ve written about various ways people go missing in several of my books. Since I’m a mystery/thriller/suspense writer, the answers in my books are usually crime-related, of course. While doing my research I stumbled upon a very rare, and possibly equally terrifying reason behind some disappearances. 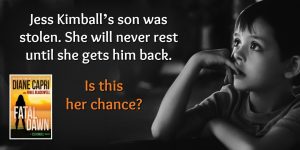 You may have heard of the term dissociative fugue, a type of amnesia where individuals experience a sudden loss of their sense of identity paired with an impulsive desire to wander from their homes. During these episodes, referred to as ‘fugues’, individuals may travel great distances with little to no recollection about how they got there.

These fugues can last as short as an hour or as long as several months. Individuals may snap out of this state as suddenly as they went into it, recalling their true identity but with little memory of what occurred while they were in the fugue. The most terrifying part is that could happen to anyone, at any time, although adults under extremely high-stress are the most likely candidates.

In September of 2006, Jeffrey Alan Ingram left his home in Washington state to make a short trip to Canada. Four days later Jeffrey realized that he was in Denver with no clue how he got there, and even scarier, he didn’t know who he was. He wandered around for hours asking for help, eventually being admitted into a hospital where he was diagnosed. For over a month his identity remained a mystery until he appeared on several news broadcasts through which his family was able to locate him.

Another strange case with many twists is that of the young elementary teacher Hannah Upp. She first disappeared in 2008 in Manhattan for two weeks until she was miraculously found after almost drowning near Robbin’s Reef. While being treated at the hospital, Hannah suddenly recalled her name but could not account for her time away from home. As is often the case with dissociative fugue, Hannah recovered remarkably and seemed otherwise healthy. Unfortunately, on September 14th, 2017, Hannah again disappeared and was last seen near Sapphire Beach, St. Thomas. Since her disappearance, Hannah’s mother has continued searching for her daughter with a dogged determination that mirrors Jess Kimball’s own determination to find her missing son who was kidnapped as an infant.

You can read more about the Hannah Upp case HERE.

Check out the Jess Kimball thrillers, including my newest release, Fatal Dawn, to find out more about Jess Kimball’s search for her son and her hunt for justice.