By Diane on December 28, 2017 in Beyond The Covers, Blog, Jess Kimball Thrillers

Looks like the retailers are offering you one last chance to begin reading the best thriller series you haven’t started yet! Get Fatal Starts for just 99 cents! And at that price, you’ll want to gift a few copies to your friends, too! (I did!) 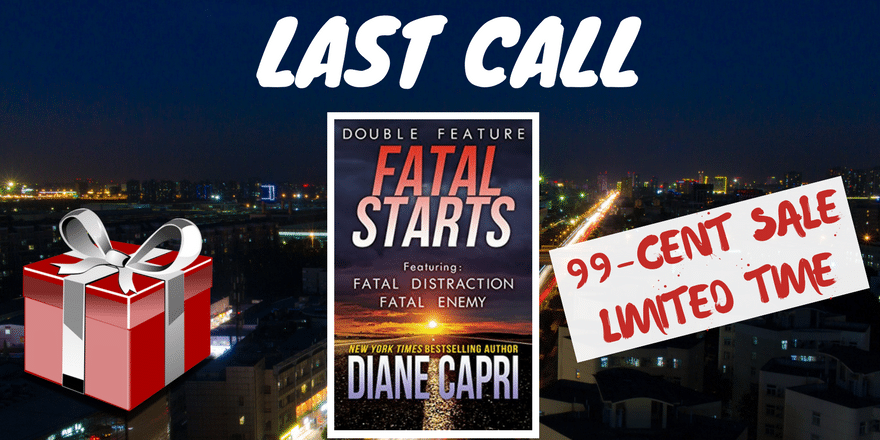 Of course, double check the price before you purchase, but you should find the Double Feature on sale for less than a dollar at Amazon Kindle, iBooks, Nook, Kobo, and Google Play.

Fatal Starts features Fatal Distraction, the first novel in the Jess Kimball Thriller Series, and Fatal Enemy, the exciting short read. Get them both for 99 cents now, before the limited-time sale offer expires!

Have you read all the books in the Jess Kimball Thriller Series?

Her son was stolen. She’ll never rest until she finds him. In the meantime, Jess Kimball is on your side. 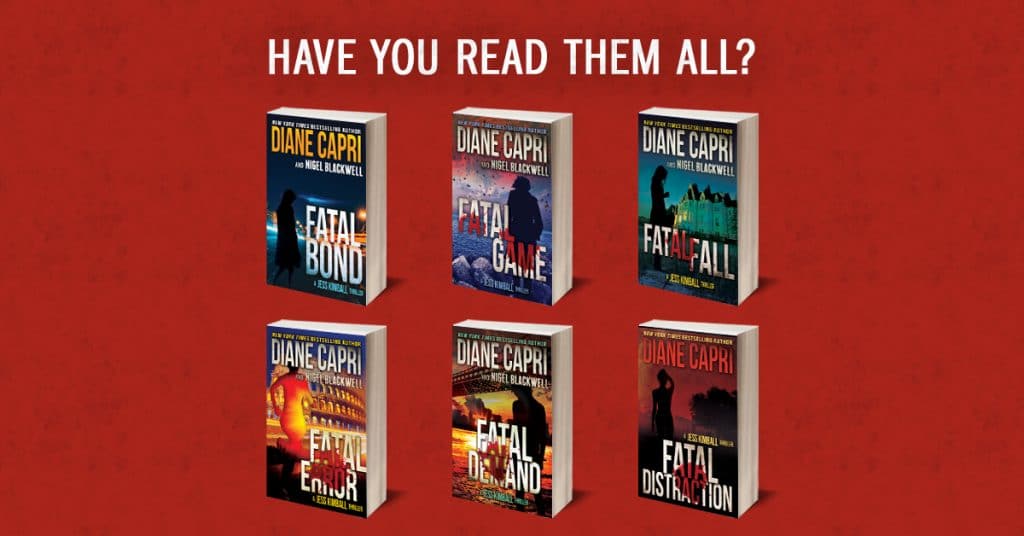 As of December 2017, there are six full thriller novels in the Jess Kimball Thriller Series.

Have you read them all?

When investigative reporter Jess Kimball’s Taboo Magazine assignment reveals a modern Italian crime family operating inside the US, she joins forces with FBI Special Agent Henry Morris to stop the ruthless killers. Jess rushes against time from Dallas to New Orleans to Florida and New York to find and stop Luigi Ficarra and save the elderly parents of the man he holds hostage. In a chase down to the wire, Jess risks her own life to stop Luigi and the demand that will be fatal.

In Fatal Demand, Jess Kimball and FBI Special Agent Henry Morris worked furiously to stop a spree killer. But one last victim remains, held hostage in Italy. When Jess accidentally thwarts the money for hostage exchange at the Rome airport, she becomes the killer’s number one target. Facing the loss of his entire operation, the last killer will stop at nothing to extract one final payoff. In the final showdown, it’s life or death, and Jess has only one chance — but who will make the fatal error?

In Fatal Fall, when Jess Kimball’s investigator finds a boy that could be her missing son, Jess races to Seattle to claim him and crosses paths with a rich and powerful senator who will stop at nothing to keep his twisted, secret life private. Can Jess discover the senator’s past and expose him before he kills again, or will she and the boy be the next victims?

In Fatal Game, a heart surgeon is in jail. His wife kidnapped. Her driver murdered. The police files are thick. Video footage and telephone calls. Statements and witnesses. The evidence is obvious, but the doctor claims it’s not true. Out of options, he begs Jess Kimball to nail the ruthless killer whose crimes are the ultimate game.

An explosion ripped through a close-knit community in Iowa, leaving five dead, dozens hospitalized, and the country outraged. One of their own is charged with planting the bomb based on airtight evidence.

Shattered and bewildered, his mother begs Jess Kimball to investigate. Since her own son was taken, Jess has never refused a heartbreaking plea from a desperate mother.

She rushes to Iowa to find the truth. Instead, she learns the only alibi witness has already fled the country.

Unwilling to admit defeat, Jess traces the witness to Spain. Teamed with a British operative, Jess is thrust into the international search for a lethal insecticide. Together they race against time to find and stop a ruthless killer before he destroys them all.

You can get a comprehensive look at the Jess Kimball Thriller Series HERE.

“Jess Kimball is like a female Jack Reacher, only nicer!”
-Martha Powers, award winning author of Conspiracy of Silence and Death Angel

Is There Such A Thing As Being Too Loyal?
“Never Give Up”: Good Or Bad Advice?