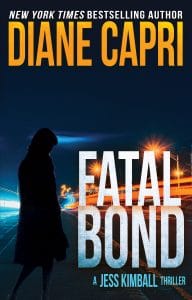 He kills from afar. Until Jess Kimball makes it personal.

An explosion ripped through a close-knit community in Iowa, leaving five dead, dozens hospitalized, and the country outraged. One of their own is charged with planting the bomb based on airtight evidence.

Shattered and bewildered, his mother begs Jess Kimball to investigate. Since her own son was taken, Jess has never refused a heartbreaking plea from a desperate mother.

She rushes to Iowa to find the truth. Instead, she learns the only alibi witness has already fled the country.

Unwilling to admit defeat, Jess traces the witness to Spain. Teamed with a British operative, Jess is thrust into the international search for a lethal insecticide. Together they race against time to find and stop a ruthless killer before he destroys them all.

Grab your copy of Fatal Bond: A Jess Kimball Thriller today and get aboard!

“Jess Kimball is like a female Jack Reacher, only nicer!” Martha Powers, award winning author of Conspiracy of Silence and Death Angel

How can she win against killers who refuse to follow the rules?

“I finished reading your new book and it is fantastic! Kept me on the edge of my seat. You have another winner! I left a review on Amazon, too. A Jess sequel gets my vote! I’m now reading your Judge Wilhelmina series. 🙂 Thanks!” B.W.

“I’m in the final stages of Fatal Distraction and am on the brink of skipping any obligations I have so I can find out how it ends. Great Book so far– continues to keep me totally involved– hope you’ll be continuing a series with Jess–” E. F.