Is There Such A Thing As Being Too Loyal?

By Diane on December 26, 2017 in Beyond The Covers, Blog, Jess Kimball Thrillers

The definition of loyalty is ”faithful adherence to leader or cause.”

The definition certainly fits Jess Kimball of my Jess Kimball Thriller Series. She constantly puts her life on the line while searching for her missing son and for people she believes need her help.

Bus is there such a thing as too much loyalty?

Loyalty, of course, is an important quality in friendships and other relationships. We can probably all agree that a loyal relationship includes supportiveness, faithfulness, and trust.

Part of loyalty is natural, I think, but there are ways to go above and beyond and inspire loyalty.
Here are some tips from Fast Company on how to inspire loyalty:

One career that relies on loyalty is journalism — which is Jess Kimball’s line of work. Reporters vow to not reveal their anonymous sources under threats of jail time on dramatic tv shows. But in real life, reporter’s loyalties lie with the readers. They’re committed to telling the truth, accurately and persuasively so that the public is informed at all times. Jess Kimball is loyal, not only for the sake of her career, but because her beliefs are rooted in the importance of helping victims who need her assistance.

We find great examples of loyalty in friendships, too. Did you know Helen Keller and Alexander Graham Bell had a fantastic friendship? He referred her to the Perkins Institute in Boston for help after he himself worked with her. When she published her book, she dedicated it to Bell in honor of their friendship. And she wrote to him, saying that she had cherished the tokens of his love, and that he and his wife were very good to her. Was that too much loyalty? Certainly not.

Even animals know loyalty. There’s a statue in Edinburgh of a Skye Terrier named Greyfriars Bobby. Bobby spent every day next to his master’s grave, after his master’s death, never missing a day. The ritual went on for 14 years until Bobby himself died. Are animals teaching us that there’s no such thing as too much loyalty? 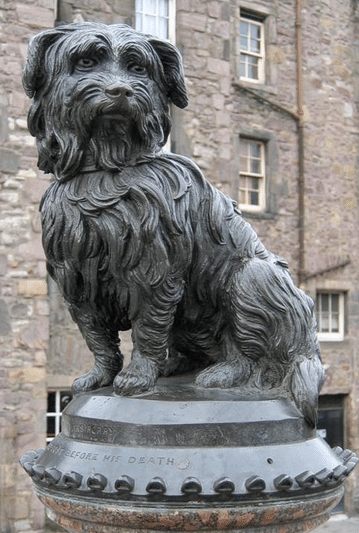 There are times when loyalty can go too far. We all have friends who are loyal to sports teams or certain brands — but what if they resorted to violence to protect their sports team? It’s happened before.
What if they defaced a building that wouldn’t carry their favorite brand?

If you’re endangering yourself for your cause, has your loyalty gone too far?

In Jess Kimball’s case, the answer is irrelevant. She’s made it her impossible mission to help crime victims, and her word is her bond.

Keep up with Jess Kimball in her latest adventure in Fatal Bond … and you decide if her loyalty has gone too far.