Shooting Accurately Underwater: Is It Possible?

By Diane on August 31, 2017 in Beyond The Covers, Blog, Heir Hunter, Michael Flint, Trace Evidence

My new book in the Michael Flint Heir Hunter series, Trace Evidence, opens with a scene involving a pistol with a waterproof chamber that allows Flint to fire effectively underwater. If you know me or keep up with my blog, you know that I research tediously every detail that makes it into the book.

So, of course shooting accurately underwater is possible. Of course, there are guns that will fire underwater and fire after being submerged. And, of course, guns can be modified to do things they might not do when purchased from the original manufacturer. 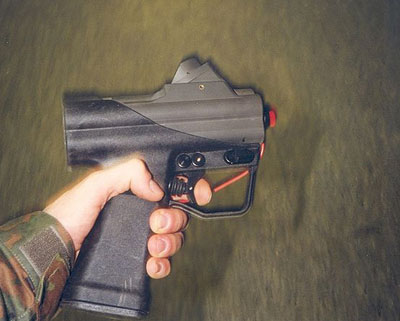 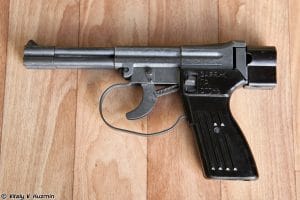 Both are major players in the underwater shooting business. They fire and strike with lethal force while submerged underwater.

A couple of readers who started Trace Evidence reached out to me wondering how it’s possible that a bullet could cut through water pressure effectively. I welcome these kinds of questions because it gives me a chance to interact with you!

So, Heckler and Koch designed the HK P-11 for combat divers. Therefore, a lot of the details about it are kept under wraps. But we know it carries a four-inch dart embedded within a 7.62mm cartridge. It uses a pepperbox revolver, and it uses batteries for ignition.

But the deadliest underwater weapon out there is the SPP-1. Designed during the Cold War for Soviet military use, it fires a 4.5mm caliber steel dart. It has four barrels, can be reloaded underwater, and it seems to be the favorite choice of security divers (which sounds like a pretty cool job, don’t you think?). At 16 feet (5 meters) underwater, it can fire effectively for a range of 56 feet (17 meters).

So the secrets to firing underwater seem to be:

Now, what is Michael Flint, Heir Hunter, doing underwater with a lethal weapon? For the answer to that question, you’ll have to read Trace Evidence. You can find it in ebook, audiobook, or paperback HERE.