Have you read my thriller Get Back Jack?

It’s the second novel (4th book)  in my Hunt for Jack Reacher Series.

In the Hunt for Jack Reacher Series, FBI Special Agents Kim Otto and Carlos Gaspar are hunting Jack Reacher (the famous creation of Lee Child, whose blessing I have to write this series.) Their search takes them all around the country because Reacher is, well, shall we call it elusive? In Get Back Jack, Reacher’s old enemies are back to get him, but why?

You know, the lure of money will lead people to go to outrageous lengths. Think about how many crimes are motivated by money. Remember Abraham Shakespeare, Florida Victim of Fortune?  Think about the motive behind many kidnappings. Think about D.B. Cooper, and the World Cup bribes. The list goes on.

These are the kinds of real-life stories that inspire my books.

Speaking of real-life stories, here are three real-life heists that you won’t believe are true.

One of the largest diamond heists in history happened at Belgium’s Antwerp Diamond Center in 2003. Part of what makes the heist so impressive is the unfathomable amount of security surrounding the Diamond Center:

“The vault … was protected by multiple security mechanisms, including a lock with 100 million possible combinations, infrared heat detectors, a seismic sensor, Doppler radar, and a magnetic field. The AWDC itself had a private security force.”

Officials believe a five-person team was headed by Leonardo Notarbartolo, who rented a small office in the Antwerp World Diamond Center. That meant he had access not only to the premises 24/7, but also access to the vault with 160 safe deposit boxes — each protected by a lock and a code. Of the 160, more than 123 were ransacked during the theft. $100 million in gems was stolen. DNA not only from the vault but also from a half-eaten sandwich dumped on the side of the road led authorities to track down and arrest the culprits.

A recent heist in Northern India was the work of eight graduates of an Indian management training program. All of them were unemployed, and all of them had all recently lost a lot of money betting on cricket matches. The alleged mastermind, Devender, headed up a plan to rob a gold finance company. Police say during the robbery, which happened in broad daylight, they overpowered a security guard and beat up bank staff, walking off with 32 kg of gold from vaults — about $1.5 million worth. Tracking the thieves down wasn’t difficult. CCTV cameras showed their faces, which weren’t covered, and one robber actually showed his real ID at the bank. 48 hours later, with further help from phone records, police tracked down the robbers and most of the gold. 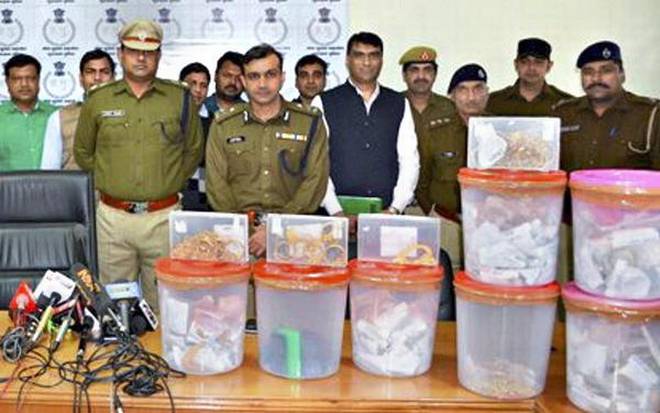 3. The Agriculture Bank of China Robbery

This one is perhaps one of the stranger heists. In 2007, a manager of a bank in the Hebei province of China stole about $26,000 worth of yuen from the bank where he worked, with the help of two security guards. Here’s where the heist gets weird. The manager, Ren Xiaofeng, then used the cash to buy lottery tickets, hoping to win more than the amount he stole, and then would pay back the bank. Here’s where it gets weirder — the plan worked! Xiaofeng actually did win the lottery and was able to return the amount he stole back to the vault, unnoticed.

Xiaofeng may have remained undiscovered to this day, if he hadn’t tried it a second and third time. He enlisted the help of another manager, stole a much larger amount from the vault — about $4.3 million worth — and spent almost all of it on lottery tickets. This time they only won about $12,700 from the lottery. The heist ended in Xiaofeng arrested, charged with embezzling, and, eventually, executed.

To read more about just how motivating big money can be, and how it relates to the Hunt for Jack Reacher, check out my thriller Get Back Jack: Find links for all vendors HERE.

We’re Giving Away 1,000 #iBooks!
“It’s Complicated” In the Search for Jack Reacher

One Response to Impossible, Dumb, and Strange: 3 Real-Life Heists