By Diane on December 1, 2016 in Beyond The Covers, Blog, Heir Hunter, Michael Flint

The storyline of my thriller, Blood Trails, is based around the fiercely competitive field of the oil business. While the story in Blood Trails is completely fiction, it’s supported by factual feuds between oil tycoons.

One of the first major public conflicts surrounding the oil business originated with John D. Rockefeller, who demonstrated that the hotter the commodity, the greater potential for outrage.

Rockefeller was so successful at the business of finding and using oil, that shortly after he formed Standard Oil of Ohio in 1870, the company became one of the largest shippers of oil and kerosene in the United States.

By the time Standard Oil grew and made up about 90% of the U.S. market, it was easy to accuse Rockefeller and his company of having a monopoly. The public, the media, and lawmakers began to vilify Rockefeller and question some of his tactics: 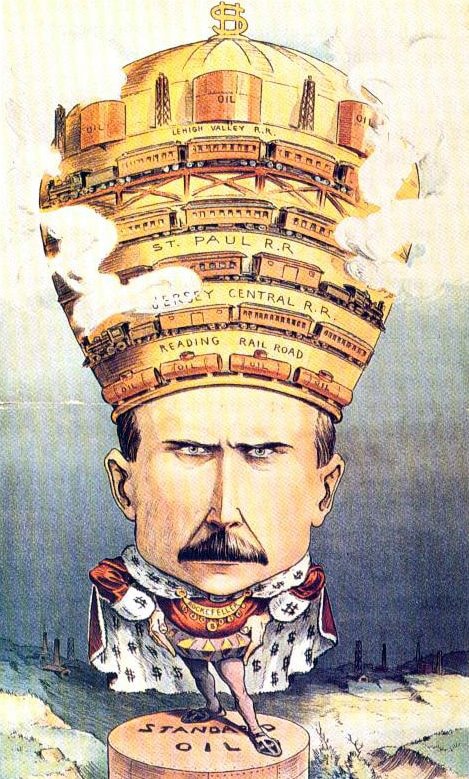 Rockefeller as an industrial emperor, 1901 cartoon from Puck magazine

A move that made the media and lawmakers particularly angry was the creation of Standard Oil Trust, through which they had dozens of separate corporations, each operating in just one state, which made it difficult for the law to attack the corporation. 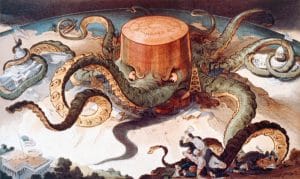 John D. Rockefeller says the only reason he didn’t take over 100% of the world’s oil refining  market was because he didn’t want public sentiment to be 100% negative against him.

The U.S. Department of Justice filed a lawsuit against Standard Oil in 1909. Two years later, the Supreme Court decided that, indeed, Standard Oil held an “unreasonable” monopoly under the Sherman Antitrust Act. Standard was forced to break up into 90 companies, two of which went on to become Exxon and Mobil.

By that point, Rockefeller was already the richest man in the world. Defenders say he wasn’t restraining trade; he was simply a superior competitor. What say you?

A quote from John D. Rockefeller reminds me of an attitude I like to adopt:

“I always tried to turn every disaster into an opportunity.”
-John D. Rockefeller

If My Characters Had Winter Break: Traditions Around the States
Fun Surprise to Share (Read: Book Giveaway!)