Taking the Spotlight Off the Criminal

By Diane on December 3, 2015 in Beyond The Covers, Blog, Jess Kimball Thrillers 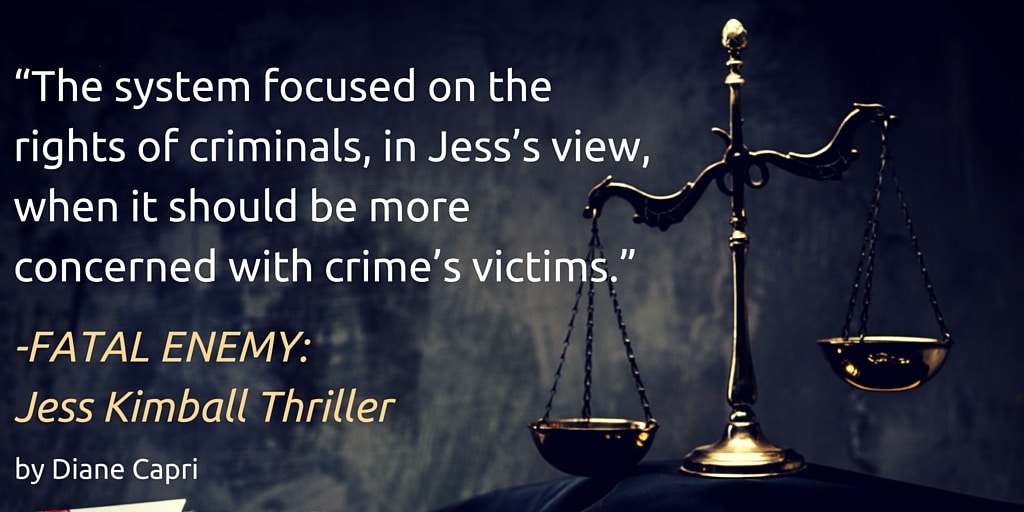 In the United States legal system, we arrest criminals, put them in jail, send them to trial, and sentence them. But the path for victims is a lot murkier.

That’s why we have formal victims’ rights programs here in the U.S. But unless you’re a victim or work in a legal field, you may not know exactly what victims’ rights are, and what it means to protect them.

Jess Kimball, of my Jess Kimball Thriller Series, is always looking out for crime’s victims, but she is not associated with formal victims’ rights advocacy procedures. Why isn’t Jess working through the system instead of around it? Because Jess is interested in the victims the system fails. She figures that’s the group that needs her the most. People like her.

Pull up a chair and let’s hear what Jess has to say about all of this, shall we?  I’ll pose the questions, and Jess will answer.

DIANE CAPRI: Thanks for joining me. I know you’ve been busy traveling for work and meeting deadlines for Taboo Magazine. So we’ll jump right in. My first question is, who exactly are the victims the law protects? Who are the people who are entitled to victims’ rights?

JESS KIMBALL: Victims, according to most state and federal programs, can be people who were harmed physically, financially, and/or emotionally by a violation of the criminal law. The legal definition is usually something like, “A victim is someone who was harmed directly by a crime committed by another person.” So it has to be direct harm, and it has to be the result of a crime.

DC: Any kind of crime?

JK: It depends on the jurisdiction. In some states, the person has to be harmed by a felony to qualify for victims’ rights programs. In other states, a victim is granted legal rights for a misdemeanor, too. What I’m passionate about is the harm that legal victims’ rights don’t reach. At the point where the system gives up. Where the real victims seem forgotten.

DC: Jess, your son was kidnapped. Does that make you a victim in the eyes of the law?

JK: I don’t need the help from victims’ rights programs, but Peter’s kidnapping was a felony and it harmed me. I should qualify under most definitions. My victims’ rights won’t kick in until an arrest is made. That’s one big, gaping hole in the process. It’s been ten years, and no arrest yet. In the eyes of the law, I’m a victim because I was sixteen when I got pregnant, too. That’s statutory rape in many jurisdictions. But my boyfriend and I didn’t see what we did as a crime and he was never arrested and that was a long time ago. 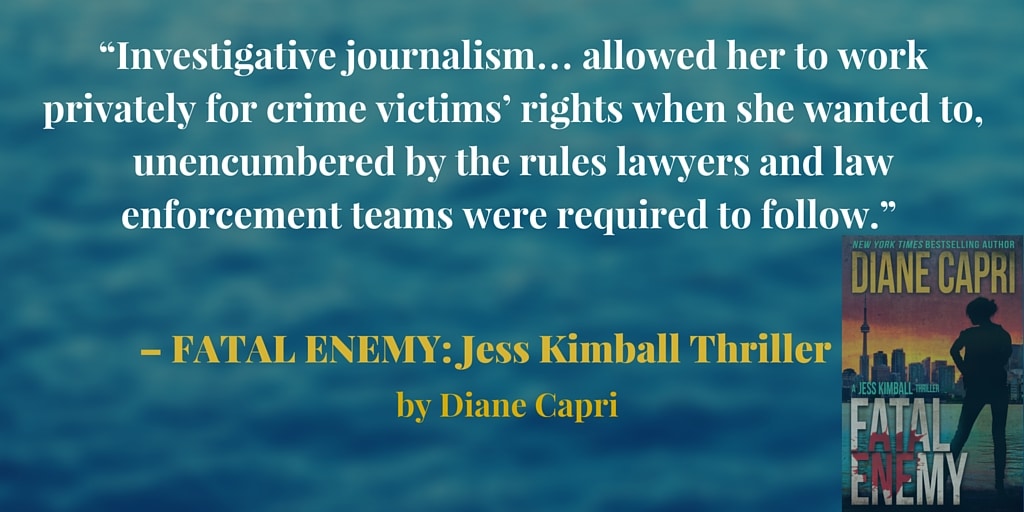 DC: Okay, since you can’t be everywhere or protect everyone, what are the formal, legal rights that crime victims have?

JK: Victims’ rights vary a bit from state to state. Some of the big ones are the right to be informed, the right to protection, and the right to apply for compensation.

DC: Tell me about the right to be informed.

JK: Sure. One of the big ones here is that the victim has a right to know about updates in their case, including trial updates, especially if and when the offender is not behind bars anymore.

DC: What does the right to protection mean?

JK: Could include police escorts, witness protection, or restraining orders. And the right to apply for compensation means the victim can send an application to the government asking for reimbursement for out-of-pocket expenses like counseling or medical expenses.

JK: Victims have the right to be heard, which means they can give a victim impact statement to a judge, which can be very moving and effective in the offender’s sentencing. Victims have a right to prompt return of personal property, which is a big part of restoring the victim’s sense of security. And they have a right to what the law considers a speedy trial. But of course, a speedy trial isn’t usually realistic. But laying out the rights like this is a way to help ensure that victims don’t get overlooked in the system.

The system that’s supposed to provide all of us with our constitutional rights isn’t always perfect. That’s what I’m saying. And real crime victims deserve at least as much care as we give the criminals who harm them.

For more of Jess Kimball and her high-risk victims’ advocacy missions,
check out the books in my Jess Kimball Thriller Series.