By Diane on July 2, 2015 in Beyond The Covers, Blog, Hunt for Jack Reacher

Here in the U.S., we’re preparing to celebrate our Independence Day July 4th

One of the most appropriate ways to celebrate is with fireworks, since, on the first anniversary of our independence, Philadelphia celebrated with fireworks in the year 1777. I love fireworks! Don’t you?

Traverse City, Michigan, which is where I spend my summers, has a nice fireworks display at the National Cherry Festival here, which begins this year on the 4th of July. There’s even an Air Show featuring the U.S. Air Force Thunderbirds. Wonder what would have happened in Jack In The Green if MacDill Air Force Base in Tampa, Florida, had Thunderbirds?

Do you watch fireworks on the 4th of July?

FBI Special Agents Kim Otto and Carlos Gaspar travel to densely populated areas and those cities have some of the best fireworks displays in the country. For example: 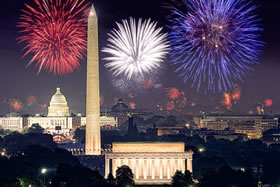 Our nation’s capital does it big for the 4th of July. Half a million people show up for fireworks, which are preceded by a concert on the Capitol lawn. The fireworks are presented by the National Park Service. They illuminate the Washington Monument, the Lincoln Memorial, and the Thomas Jefferson Memorial. The show lasts about 17 minutes, and is accompanied by live music.
To watch it from home…
PBS broadcasts it live: Check your local listings.

NEW YORK CITY (Don’t Know Jack and Get Back Jack)

This year, 4th of July fireworks will be set off from the Brooklyn Bridge and from barges below, as well as from locations in midtown.

To watch the NYC fireworks display from home…
NBC will broadcast the Macy’s 4th of July Fireworks Spectacular Saturday, July 4 at 8/7c.

To watch the Chicago fireworks display from home…
No word at this point on anyone broadcasting the show live, but if you go to the Navy Pier webcam by clicking HERE, your chances of seeing the show are pretty good.

Are you celebrating U.S. Independence Day this weekend? If so, do you plan to watch fireworks?