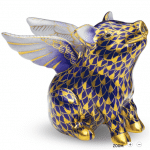 Are you thinking things may get better when pigs fly?

No doubt you’ve seen it splashed on bumper stickers and greeting cards and just about everywhere.  Comics like Woody Allen and Albert Brooks have spent decades entertaining us with variations on the wry joke that “Life Sucks – And Then You Die.”

Yet, studies repeatedly prove that we actually get happier as we age. Happiness levels follow a U shaped curve, with the least happy folks in their mid-40s. Cross-culturally, even in countries with different healthcare and welfare systems, seniors are happier than the rest of us by a significant margin. Why is that?

More than 21 million people have watched this Bobby McFerrin video, which serenades the answer perfectly. Maybe it’ll brighten your day:

This week, a reader pointed out something I’d forgotten.  A scene in my book Due Justice where senior Kate Austin explains how she does it to a troubled thirty-something Willa Carson. Here’s the quote:

You see, Wilhelmina, I believe in the affluence of the universe. I believe you make your own life. You decide what it is that you want, and then the universe gives it to you. It’s not that you don’t have to work for it, but the law of least effort applies more often than not. If it’s too much trouble, it’s usually not worth it. Happiness is first, seeking happiness is the most important quest, and achieving it is life’s best goal.

Kate is not a fragile woman. A single mom of four, she’d found herself in many tough, unchangeable situations. The only variable, she eventually realized, was her attitude. Kate accepted reality, stepped up to the plate, and made the conscious decision to be happy first. She suggested that Willa give the Law of Least Effort a try.

Somewhere, not far below the surface, we each know what makes us happy. And it’s something simple. Don’t try too hard to achieve something grandiose, Kate would argue. You’re closer to happiness than you realize.

This is the time of year when even the happy times can be trying. So much stress and pressure. When you’re feeling overwhelmed by it all, have another listen to Bobby McFerrin or remember Kate Austin’s wise words. Let me know if they help you  put happiness first, too. I hope they do.

Happy Thanksgiving and NewsFlash!
Amanda Knox: Can You Solve This Case?

12 Responses to Feeling Frazzled? Try The Law of Least Effort