Amanda Knox: Can You Solve This Case?

By Diane on December 3, 2013 in Beyond The Covers, Blog, Can You Solve This Case? 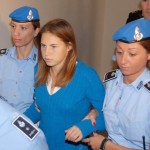 Her case is like one of my twisty plots that keeps us reading long into the night to find out what happens. Help us out here! Did she or didn’t she???

In 2007, at age 20, American college student Amanda Knox ventured from college in Seattle, Washington, to Perguia, Italy to study abroad. She rented an apartment with a 21-year-old British woman named Meredith Kercher. On the morning of November 2, 2007, Kercher was found dead in her bedroom, brutally stabbed to death. Knox and her Italian boyfriend, 23-year-old Raffaele Sollecito were arrested for murder.

Police said the couple participated in an extreme sex game with Kercher, 21, resulting in Kercher’s murder.

Is that what happened?

Sollecito maintained he was not present at the Knox-Kercher home that night. Knox says she spent the entire night at Sollecito’s place, too, although she admitted using marijuana which might make her recall unreliable.

At trial, the prosecution hammered two pieces of forensic evidence:

But the knife didn’t match Kercher’s wounds, the defense claimed. Experts said the amount of blood on the knife was too small to be sure it was Kercher’s.

As for the bra clasp, lawyers argued it could have been contaminated because it wasn’t recovered from the crime scene until six weeks after the murder.

Suspicious circumstances were claimed to bolster the case against Knox.

Knox’s explanation: She didn’t literally mean that she would see him later; she meant the English colloquialism.

Knox’s explanation: “When I feel uneasy or nervous, I act a bit foolish.”

Knox’s explanation: She said this after hours of interrogation by police in a foreign language amidst physical abuse by investigating officers. An Italian judge later agreed Knox’s confession was a result of “total confusion.”

Knox’s explanation: “Foxy Knoxy” was a silly childhood nickname she was given by girls on her soccer team.

There’s one more important aspect of this case to point out. A small-time drug dealer named Rudy Guede was found guilty of the murder of Meredith Kercher in 2008. He’s serving 16 years. Did he act alone?

Knox’s retrial began in September 2013. Last week, a prosecutor called for her guilty conviction to be reinstated. An appellate judge has yet to making the final ruling.

What say you?  What kind of evidence would you need to solve this case so we can all get some sleep?

40 Responses to Amanda Knox: Can You Solve This Case?