Prudence MacLeod is one of the most versatile authors we’ve Revealed.  She hails from Canada, where breathtaking scenery comes with long, dark, and cold evenings. Yet, Pru not only survives, she thrives. When I caught up with her, it was way, way, way too early for me. Good thing we had the coffee brewed.

Prudence MacLeod: Good morning, Diane. Thanks so much for inviting me over for coffee. I love the giant mug, but the seat is a little hot. J I know, I know, my turn for the hot seat. I’m ready.

Diane Capri: While I wake up, tell us a bit about yourself.You look pretty comfy there but like the iceberg behind you, we know there’s about 80% of Prudence MacLeod below the surface, hmmmm? 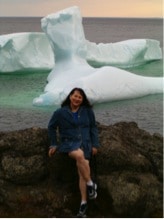 Prudence MacLeod:  I am a spiritual seeker, dog trainer, official Reiki Master and interior designer, and personal trainer who has turned her hand to writing. I am also an avid chess player, not a great one, but an avid one. I build, I bake, I knit, and I tell stories.

Diane Capri: Whew! Is that all?

Prudence MacLeod:  I have roamed far and wide for over sixty years in this realm, and I have seen much; some I wish I had not, and a great deal that I would love to see again. Some days I feel like Bilbo Baggins, for I have been there and come back again. No, I haven’t written a book about my wanderings, but much that I have experienced, observed, learned, surmised, or imagined, is woven into the tales I have written. I do hope readers enjoy them.

Diane Capri: With all that experience behind the words, how can we not? Sounds like a busy existence, though. Confess. You’re one of those annoying worm-grabbing larks?

Prudence MacLeod: Oh, morning person without a doubt. I have always been awake and on the go with the birds. My partner is a real night owl, so we have compromised. Midnight became the “bitching hour” because that’s when I start whining to go to bed. This usually keeps me in bed until seven or eight. If I sleep until eight thirty I feel like I have to play catch up all day. Brrr, gives me the shivers just thinking about it.

Diane Capri: What do you do to unwind and relax?

Prudence MacLeod: I read, I reread, I read almost anything I can get my hands on. I read Diane Capri, I read Amanda Quick, I read Alica McKenna Johnson, I read Jade Lee, I read comic books, I read J.K.Rowling, and right now I’m immersed in Myndi Shafer’s book, Shrilugh. I will soon have finished it and will be nagging Myndi for the next installment.

Diane Capri:  Looks a bit hard to spend all that time reading like this …. 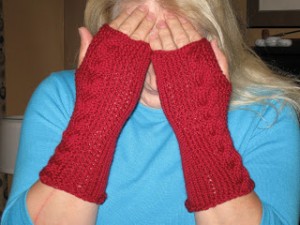 Prudence MacLeod:  *laughs* Oh, and I knit, socks, mostly. Winters are cold here in the north and wool socks are a big hit at Christmas. 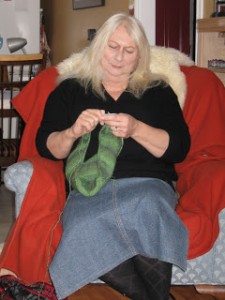 Diane Capri: A little owl told me you are writing a series of novels. True?

Prudence MacLeod: Here we go. **leaps up and shakes pom-poms** Actually Diane, I am in the process of writing three series. No, I didn’t plan it that way. I wrote three novels that I expected to be stand-alone books, but, at the urging of a number of fans, as well as my editor, they are being extended into a series of series, if you will. There are plans for five books in each series. The three starters are Novan Witch, Immortal Tigress, and Hunter.

Diane Capri: Where can we locate your books on our virtual shelf space? Fantasy? Adventure?

Prudence MacLeod:  These are what I call escape books. Inside readers escape to new worlds, have great adventures, romance, excitement, and, in the end, a satisfactory conclusion. You will fly on space ships, battle with aliens, meet vampires, and a whole host of other characters and creatures. Any of the books in the series will be able to stand alone, but will be richer for having a few familiar characters wandering through the pages like old friends dropping by for coffee.

Diane Capri:  Is there a writer you idolize?

Prudence MacLeod:  Indeed there is. The lady is Ruth Cardello.  Track her down on FaceBook: http://www.facebook.com/authorruth.cardello

Diane Capri: Why is Ruth your hero?

Prudence MacLeod:  Because even though she is a bestselling author she spends as much effort promoting other authors as she does herself. Ruth is not only an amazing writer; she is a special human being who firmly believes in paying the success forward.

Diane Capri:  what a lovely complement. Ruth would no doubt love to hear it. Have you told her any of this?

Prudence MacLeod: I’m sure I have told her several times before, but if not, let me do it right now. Ruth, you are an awesome writer, a beautiful person, and I want to be just like you when I grow up.

Diane Capri:  Thanks for being Revealed here today, Pru. Where can our readers find you online?

Folks, you already know I love to hear from you! I see everything you send to me and reply as soon as I can. No exceptions! Four fastest ways to reach me? Leave comments below this post.  Join me on Facebook: http://www.facebook.com/DianeCapriBooks  or Twitter:  https://twitter.com/@DianeCapri  or send me an e-mail using the form here: E-mail Contact

Mistaken Justice? Don’t Miss Our Final Day!
Did You Get Due Justice?