What Does Due Justice Mean To You?

Before Kim Otto and Carlos Gaspar began hunting Jack Reacher, Willa Carson and Jenny Lane were working for Justice even as Reacher was handling different problems in his own way.

Life, we know, is not fair. There’s plenty of bad luck and trouble to go around. When trouble comes, we want Due Justice.  Judge Willa Carson makes it so. Willa makes things right, armed only with her gavel and her wits.

Lee Child disclosed that readers say they love the now-iconic Jack Reacher in part for the same reason. Because, deep down, “He always does what he thinks is the right thing.” Here’s precisely what Lee said:

Reacher has supreme confidence in one thing only: Jack Reacher’s Rules.

We love that he champions his personal belief system and metes out his own brand of comeuppance the hard way. Reacher is a wanted man, a persuader, because he knows the important facts and he alone decides what due justice is.

We’d like to do that, too. But we’re bound by rules made by others. Finding justice within rules she didn’t create and can’t change is Willa Carson’s worthy challenge.

Reacher’s never confused about what to do. Moral ambiguity does not exist in his world. He takes what comes and deals with it as he sees fit and accepts the consequences in the moment, even as he’s ready to die trying on any given day. Reacher has nothing to lose.

Willa Carson’s world is more complicated than Jack’s. For starters, Willa has way too much to lose. Willa must be a different kind of persuader.

We know Reacher’s actions aren’t the same as real world justice.  We trust Reacher to make the right decisions, but we wouldn’t entrust anyone with the power to kill at will in our real lives.

We know life is not fair and we live in an unjust world, even though we don’t like that fact much. Willa Carson faces the unjust and changes a lot more than what those who make the rules would allow.

In fiction and in life, we want due justice to prevail. Maybe we can’t turn back the clock to the moment before the bad thing happened and make a different choice or create a different result. But at the very least, we want the bad guys satisfactorily punished.

To me and to Willa Carson, this is Due Justice.

Before any Justice Series book begins, a bad thing has happened. Usually, it’s murder. We can’t erase the harm or return the dead to life. And one thing we know when we begin the first page is that things are about to get even worse.

We can hope for rescue from Jack Reacher, but we can’t wait for him. At the very least, Willa Carson can find the bad guys and deal with them here and now. We hope. 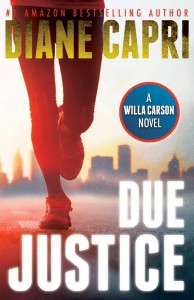 What do you want when you seek Due Justice?

I love to hear from you! I see everything you send to me and reply as soon as I can. No exceptions! Four fastest ways to reach me? Leave comments below this post.  Join me on Facebook: http://www.facebook.com/DianeCapriBooks  or Twitter:  https://twitter.com/@DianeCapri  or send me an e-mail using the form here: E-mail Contact

9 Responses to What Does Due Justice Mean To You?