It’s no secret that books set in Italy, such The Vendetta by Kecia Adams, easily capture my attention. We’re going to share how Kecia’s life in Rome led her to the writing world. Maybe we can do it, too! 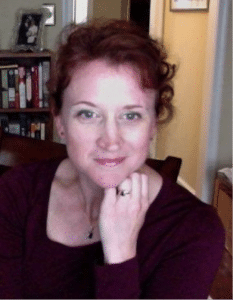 Diane Capri: Living in Rome, writing, sounds like a dream come true to me. Before we get to that, you’ve done quite a bit of other globe trotting, haven’t you?

Kecia Adams: I am a traveler—it’s my favorite thing to do–well, besides reading.

Diane Capri:  What set you off on the nomad’s path?

Kecia Adams:  The culture shock of spending my childhood in Santa Fe, New Mexico, then moving with my family to the suburbs of Philadelphia hit me hard early on. I translated that experience into a strength (meaning, I didn’t speak in class for an entire year) and redeemed my high school and college years by studying in Europe—Denmark and Paris, respectively. You should see my journals from those days … or, erm, maybe not! *laughs*

Diane Capri: *grins* Hey, I spent my college years in Detroit where the weak are killed and eaten. Now you write romance and I write crime. Might be fun to compare notes, hmm? But you had other adventures, too.

Kecia Adams: After receiving a degree in International Relations from USC, I entered the Navy. Mostly, I learned to write and edit the vast amounts of paperwork required to keep that organization functioning like the well-oiled machine it has been for centuries.

Diane Capri: Even after leaving the service several years ago, you didn’t actually settle down.

Kecia Adams:  I meant to. I did leave the Navy to “settle down” with my own personal hero. Instead we’ve traveled the world together, lived in Italy and South Korea, but returned home often enough to know that love really does make the world go ‘round. It was while touring in Italy that I began to write down the stories that had rattled around in my head for years.

Diane Capri:  And that first story became The Vendetta. How did that happen? 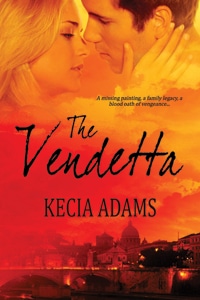 Kecia Adams:  I am married to a military guy  (now retired), and in 2004 we were posted to Rome, Italy. I know, fabulous, right? Various issues with the hubster’s commanders made the assignment not necessarily a dream job, but we’d had a goal to live in Europe for a while. And there we were, in Rome! My expectation was that we would have an amazing three years as a family, full of adventure, culture, food, sightseeing, and Italians (!). And we DID have all those things and more. But it was also hard. Even in an appealing, forgiving place like Rome, it is hard to juxtapose cultures and learn new systems of living. So how is that related to my writing? Well, all of my frustration with the expectation of living in Rome versus the reality of the “Eternal City” needed an outlet. So I wrote. And wrote and wrote. Eventually I became fascinated with the characters I saw every day. Once I had characters, then of course I had stories to tell. The Vendetta, my debut novel, has a lot of that writing in it, but it is so much more now too.

Kecia Adams:  Vengeance intersects the international world of fine art when ski town barista Lisa Schumacher serves up espresso—with a dollop of passion—for Italian businessman Nick Carnavale. Lured to Rome by family ties, Lisa races to find a mysterious missing painting in time to convince Nick that love, and life, is worth more than his revenge.

Diane Capri: It sounds a little breathtaking, doesn’t it? In fact, you enjoy breathtaking activities, right? In fact, didn’t you tell me you’re working on a novel about high stakes sailboat racing?

Kecia Adams:  *laughs* Right.  Rafaela Benedetto, heiress to Benedetto hotels and Ian’s former fiancée, inherits an America’s Cup sailboat and racing team after her grandfather dies. To save her family’s financially troubled hotel chain from hostile takeover by a ruthless rival, Rafaela hatches a plan to win the America’s Cup–with Ian as captain. There is family precedent for such a challenge: over 100 years ago, Ian’s great-great-grandfather captained the winning boat.

Diane Capri:  Are you an adrenaline junkie, then?

Kecia Adams:  A little, perhaps. Now, when I’m not spending ridiculous amounts of time at the computer dreaming up hot characters and spicy conflicts for my fiction writing, I love to ride my bike really fast and shop for shoes with my two daughters—heroines (and world travelers) in the making.

Diane Capri: But that’s not all, is it? What about this breathtaking location photo we found? 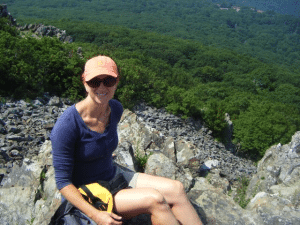 Kecia Adams:  Nah. I was breathing just fine. I hiked there with my family—above Virginia’s Shenandoah Valley. They call it the Blue Ridge for a good reason!

Diane Capri:  You’ve told me you’re in the middle of the toughest part of writing a new book.

Kecia Adams:   The hardest part for me is writing the rough draft. I would love to be the writer who is able to plan and plot and know exactly where the story is going when I sit down at the computer, but that doesn’t work for me. I do quite a bit of character work before I start and I have a general idea of what kind of story I want to tell (rags to riches, revenge, etc.) but mostly I just have to sit down and put words on paper. I write about 1000-2000 words a day when I’m working on a draft, which I send in a daily email to my husband for accountability. He knows to ask for them if he hasn’t seen the email that day. He doesn’t even look at what I’ve written usually, he just serves as a check for myself. Once I have a big, messy draft, I love to get in there and start editing. But getting into that first look at the story can be excruciating for me!

Diane Capri:  We’ll let you get back to it, then. Thanks for coming in today. Where can readers connect with you?

Kecia Adams:  Most days, I’m hanging out at my blog: http://keciaadamsauthor.wordpress.com/ or on Facebook http://www.facebook.com/KeciaAdamsDilday. Please do stop by!

I love to hear from you! I see everything you send to me and reply as soon as I can. No exceptions! Four fastest ways to reach me? Leave comments below this post.  Join me on Facebook: http://www.facebook.com/DianeCapriBooks  or Twitter:  https://twitter.com/@DianeCapri  or send me an e-mail using the form here: E-mail Contact

What Does Due Justice Mean To You?
Thrilled to Wish You Happy Holidays!