Our series on new authors and new voices is winding down. For the past few weeks, by popular demand, we’ve been offering Licensed to Thrill readers a glimpse into authors and books you might not know because the marketplace is crowded and finding good reads is more confusing than it needs to be. So check out our entire Diane Capri Reveals series and see whether you’ve missed a authors and books you’d like to sample for yourself or gifts for your favorite readers. Today, you’re in for a treat.

Ginger Calem’s blog asks, “Who is Ginger Calem, anyway?” You’re probably wondering the same. Lean in and we’ll let you know why Ginger is an author to watch. 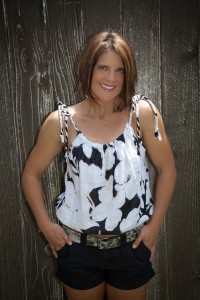 When Ginger is not at the gym, or tending the home fires and keeping the house natives fed and happy,  she  writes YA with a pinch of paranormal, a generous sprinkle of humor, and a dollop of sass, she claims. But when we interviewed her, we found out a few things that suggest otherwise. What do you think?

She’s had plenty of real world experience to fuel her writing. After enjoying a career as a globetrotting, professional water skier at parks like Sea World and Six Flags, Ginger is now a Level 1 Certified CrossFit coach and (along with her husband) the owner/head trainer of CrossFit Georgetown. Ginger and her training staff help her clients gain, or re-gain, a level of fitness that allows them to work hard and play hard and look good too. Ginger is the founder of WritersButt, a program that focuses on the mind/body connection for writers through inspiration and tips on fitness and nutrition.

Diane Capri: Sounds exhausting to me. Pass the chocolate, Ginger, and tell us about your novel series while I sit here on my writer’s butt and rest.

Ginger Calem: Okay, but just a short break. It’s a YA series about a very old society of Ninjas who have been laying low but are now ready to become active again, for the greater good … or their version of it. It explores the sometimes sticky question of whether it’s okay to do what is ‘wrong’ in order to do what is ‘right’.

Diane Capri: The means and the ends, hmmmm? You’re kind of stuck on this bottom-side concept, aren’t you? *grins*

Ginger Calem: *laughs* I guess so!

Diane Capri: I know you watch television sometimes and I suspect you’re a closet mystery/suspense/thriller lover. Let’s explore that a bit. One show we both like is Dexter. Justice is the underlying theme in all of my books, so I know why Dexter intrigues me and my readers. What is it about the serial killer Dexter that appeals to you?

Ginger Calem:  Its twisted sense of justice and messed up concept of ethics fascinates me. Dexter cuts through the mass of red-tape in society and gets stuff done. Of course this stuff is killing and cutting up bad guys, so it’s complicated, but they totally deserve it. *grins* My most recent TV discovery is PBS’s Sherlock. Wow … it is fabulous. Quick-witted, tight, clean writing and the loveliest, driest humor.

Diane Capri: As I suspected. So confess – you’re a closet mystery writer, aren’t you?

Ginger Calem: Fine. The cat’s out of the bag. I wrote a humorous mystery set in small town Texas, much like my own town. My protagonist has a lot of me in her. Like Grace, I don’t make cupcakes, even for bake sales, I can’t stand sweet tea and I believe a day is not complete without red wine involved. One very big difference is I have never found a dead body stuffed into a BBQ smoker, so there’s that bit of good news!

Diane Capri: You are adventurous, though. Some of your activities, like “tagging,” can get you arrested in American cities. Then you could experience the justice system up close and personal, for sure. What’s this photo all about, hmmm? 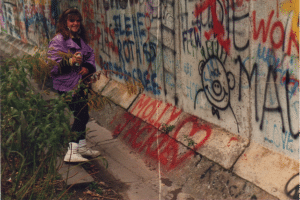 Ginger Calem: My little piece of history, I guess. I spray painted the Berlin wall before it was destroyed. It seems odd that the only time we see that wall today is in historical photos. But maybe that’s good for me – no evidence remains except this photo you’ve now spread all over the world!

Diane Capri: *grins* We don’t call this series Reveals for nothing!  Let’s talk a bit more about your writing as we wind up here. What is one thing that’s surprised you about writing? Come on. … Otherwise, I might have to tell folks that you once water-skiied in a prom dress and a tiara. Oops! Lost my leverage there…

Ginger Calem: That little tidbit was supposed to be just between us, Diane. But, I forgive you. Let’s see, what I love and what does surprise me in my writing is that my characters become more than what they are in my head. They may start as a picture or a voice or even a reaction to a situation that pops into my mind, but once I have them down on the page, they are strong-willed with voices of their own. It’s like I don’t know everything about them but if I give them room to be themselves, they show me so much stuff that I have to race to keep up with them. It’s a lot fun.

Diane Capri:That strong-willed thing might come from their creator, I’m guessing.  Here you are with Sebastian. What a sweetie! But, seriously, how much did it cost you to get that done to your hair? 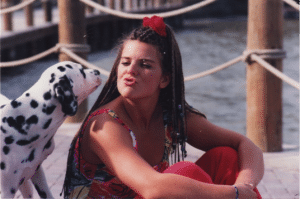 Ginger with 100 braid extensions and an admirer!

Ginger Calem: Okay! Break’s over! Hop off your WritersButt and let’s get back to that workout!

Diane Capri: Yikes! Before Ginger kills me with healthy living habits, we hope you enjoyed our chat today. Connect with Ginger at her website: http://gingercalem.wordpress.com/  and on Facebook: AuthorGingerCalem