Like millions of mystery readers, I’ve been a Sue Grafton fan from the letter A. “A is for Alibi,” that is. Sue’s first Kinsey Milhone story, the one that kicked off her extremely popular alphabet series, was published in 1982. Back then, I was dreaming of writing fiction one day. Sue was a trailblazer and an inspiration to me even though I didn’t know her and didn’t expect I ever would.

But life is funny that way, isn’t it? 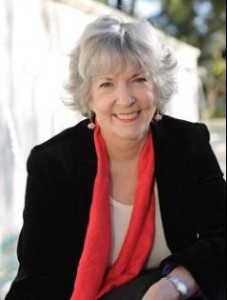 Fast forward a couple of decades and I had the amazing opportunity to meet Sue Grafton several times. At Bouchercon in 2001, I was standing near the end of the very long queue, which stretched almost a full city block.  Even with my glasses on, I could barely see the woman seated behind a small table off in the distance.  We moved with glacial speed as Sue took a few moments to talk to everyone who waited patiently to meet her and have their books signed.  More than an hour later, Sue Grafton was just as pleasant to those of us at the very end of the line as she had been to those at the front, and I met some interesting people while waiting.

Two years later, I was fortunate enough to have the opportunity to interview Sue and sit on a panel with her at Sleuthfest in 2003. By that time, she’d worked her way through the alphabet to “Q is for Quarry,” which was Kinsey’s 17th case, a story based on an unsolved murder involving the body of an unidentified woman discovered near Santa Barbara in 1969. Her work on the case itself was as fascinating as the book she wrote.

Sue Grafton has continued to work her way through the alphabet, completing a new book every two years. Her most recent release is “V is for Vengeance.” I found Sue funny, generous, and at least as intrepid as Kinsey Milhone – her alter ego.

So I found that interview, originally published in The Rap Sheet, the Florida Chapter of Mystery Writers of America’s newsletter. I dusted it off and thought you might be interested in reading it. May Sue Grafton’s words provide you with motivation and inspiration, too. Enjoy!

Diane Capri: “Q is for Quarry” was released in October 2002 and is the seventeenth book in your alphabet series featuring Kinsey Milhone.  Private investigator Kinsey Millhone continues her mystery-solving skills in your popular series that remains sharp and witty with each additional novel.  What has been the biggest challenge to you in keeping a series going for seventeen books?

Sue Grafton: The biggest challenge is keeping myself fresh.  I try to write every book as thought it were my first book and every book as though it were my last.  With this series, I’m trying not to repeat myself.  I’m not interested in writing the same novel twenty-six times so I’m always looking for some new angle, a new approach, a different kind of story to tell.  In the main, I write about homicide, but the variations are many and my job is to retain the quality of the writing, which means I can’t afford to coast, can’t allow myself to cheat, and won’t permit myself to get lazy, or take the easy way out.  I’m always writing just a bit outside of my comfort zone, striving for effects I’m not quite sure I have the skills to execute.  The process keeps me on my toes.

Diane Capri: You wrote an article for WRITER magazine about the importance of recharging your batteries.  What’s the best advice you have for writers on that subject?

Sue Grafton: When it comes to recharging your creative batteries, you have to listen to that little voice inside that tells you when you’re ready to embark on a book again.  Writing is hard work.  Writing well requires focus, concentration, and sustained energy.  When a book is done, we need to rest, take a little time off to regroup before we launch ourselves into the fray again.

Diane Capri: You’ve also described ten stages of the novelist’s creative cycle.  What are they and which is the best?  Worst?  Why?

Sue Grafton: The ten stages of the creative cycled, as I experience it, are: Urge, Inspirations, Research, First Draft, Revisions, Completion, Submission, Elation, Second Thoughts, and Dormancy.  There isn’t any best or worst.  I think every part of the process is inevitable.  What’s important is recognizing where you are and figuring out what’s required at each stop along the way.  Usually the Urge and Inspiration stages are exhilarating.  Research is easy thought it sometimes takes courage to make those calls to perfect strangers to get information we need.  With the First Draft and Revisions, the work starts getting harder because doubts do set in especially at the three quarter mark when you wonder whatever made you think the impetus for the books was such a keep idea anyway.  Completion usually feels good in the same way it would feel good when your jailer lets you down off the rack. Submission takes nerve because you have to let the book go, but at least it’s out there.  The Elation phase is usually brief because Second Thoughts, creep in again making you wonder if the book is anywhere close to what you hoped for when you first started out.  Dormancy is that point when your head is completely empty and you’re convinced you’ll never have another idea for as long as you live.  You have to trust that Urge and Inspiration will come around again and you’ll be off and running.

Diane Capri: You have been a great inspiration to me, and to other writers.  Who inspired you to try this genre?  Why?

Sue Grafton: My father was the writer who inspired me to try the mystery genre.  He loved hard-boiled detective fiction … mysteries of any kind.  He wrote and published three mystery novels in his lifetime and thought he couldn’t find a way to support his family with the proceeds, he loved the process and taught me to appreciate the challenge of the form.

Diane Capri: You’ve said that it took you six books to get to the point where you were able to replace the salary you left behind to become a novelist.  Is that typical?  Why? [Also, it might matter if you were making millions as a screenwriter, too.  In other words, if I’m a minimum wage employee, I should be able to meet the “replacement income threshold” faster than Bill Gates would.]

Sue Grafton: I never made millions as a screenwriter … thank God!  If I had, I might still be toiling after the Almighty Buck.  I wrote “A” IS FOR ALIBI as a way of healing my soul which is what writing is about.  I think in my peak income years, we made close to three hundred thousand dollars (I say we because I was writing with my husband by that point …)  I was paid ten thousand dollars as an advance on “A” so you can see how wide the gap was.  What I knew in my heart though was that anything you do for love feeds and satisfies in a way that working form money just can’t touch.  It did take me until “G” IS FOR GUMSHOE before I could afford to give up my “day job” in Hollywood and devote myself fulltime to the books.

Diane Capri: What advice would you give to a writer who has written several novels, seen them published, but hasn’t had significant commercial success, knowing that “keep trying” is not inspirational or practical advice sufficient to feed the children?

Sue Grafton: I think a writer has to be realistic about paying the bills.  Even during the years when I was becoming disenchanted with Hollywood and trying to earn my way out, I had to do a certain amount of writing for hire to keep myself afloat.  I think if you’ve had a couple of books published without seeing any so-called commercial success, it might be time to sit down and analyze where you are and what you want.  You can’t calculate a hit.  You can’t manipulate your writing to try to fit the parameters of books on the bestsellers list.  That’s an invitation to disaster, which is to say imitating other writers.  There are always those “one hit” wonders who seem to come out of nowhere and shoot straight to the top with no intervening struggle, but I’m not convinced that’s a road you’d want to travel.  Many of those writers never reach the heights again.  Better to take the slow road and find a way to enjoy the climb.  Your goal has to be to write well.  When unpublished writers ask, “How can I get an agent and an editor?” I say, “Well, that’s easy.  All you have to do is write like and Angel and you’ll have the world eating out of your hand.”

Diane Capri: What do you think is the most significant quality for a writer to have?  Why?

Sue Grafton: The most significant quality a writer can have is passion, without that, you have no chance at all because the work is too hard and the struggle for recognition takes too long.  Passion is what carries a writer through the tough times.

Diane Capri: What is the worst interview question you’ve ever been asked?  The best? [No fair naming one of mine!!! :)] Why?

Sue Grafton: The worst interview question is “What question do you wish I’d asked?”, because the interviewer is asking me to do the work of the interview which is not my job.

Sue Grafton: I’m just starting work on “R” and haven’t settled on a title yet.  Usually I keep the information to myself in case I change my mind, which I’ve done more than once.

And now, do you feel inspired? Motivated? I sure do and I hope you do, too!