One of the most exciting times for a writer is the moment our books reach the bestseller lists. When Don’t Know Jack hit the #1 spot on Amazon’s Bestseller lists, including Best Mystery, Best Legal Thriller, and more, both in the US and the UK, one of the first people I called was my friend Carla Neggers. You see, Carla is no stranger to bestseller lists – foreign and domestic. She’s the author of more than 60 books and she’s both a New York Times and USA Today Bestseller many times over. I was certain she’d know how to celebrate all that excitement. Of course, she did. I’m passing along her advice for the time when this happens to you. And please tell us how you celebrate important events in your life! 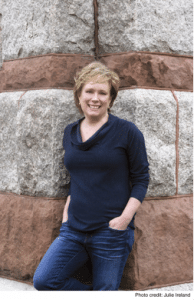 Carla Neggers: Funny story. The first time I made the New York Times “extended” bestseller list, it was so unexpected that…no one knew. The list comes out on Wednesday. A friend of mine got hold of it on Saturday and emailed me her congratulations. I’m like, what? Wow. So I emailed my agent and editor and told them. The book was The Waterfall, which is being reissued in November. It made #35 for one week. We were all thrilled. When The Harbor made the “printed” New York Times list, I was at a signing in Boston. My daughter was there. It was so cold out. As cold as Boston gets. I had no heat in my hotel room. I felt like Bob Cratchit. But my agent sent champagne, and my daughter and I celebrated! (Heat was later restored.) I loved having her with me, and I loved that I was at a signing when I got “the call,” because I was among readers, people like me who just enjoy a good book. In my world, “pub(lication) day” is a day to celebrate, whether or not a book is destined to be a “bestseller.”

Diane Capri: Now there’s a woman who knows how to celebrate! Good thing, too, since she’s celebrating a new book release today. But more on that later. Early on in our relationship, we found we both enjoyed the quiet life. Carla and I have enjoyed comparing her home in Vermont and mine in Northern Michigan, where we both find time to relax as well as write. Of course, she’s intrepid enough to thrive through Vermont winters while as you know I am a confirmed snowbird. Notice Carla’s photo of the Grouse in Ice and mine of the Loon in Sunshine! 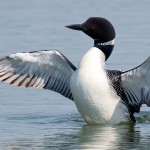 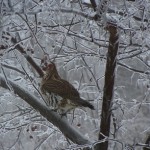 Diane Capri: It’s surprising how solitude in peaceful locations inspires writers. When you began writing as a kid, you’ve famously claimed to have perched yourself in a sugar maple tree with a pad and pencil. Surely you’re not still writing up in that tree? Where’s your favorite writing spot these days?

Carla Neggers: Not that tree or any tree! I do have a gnarled old sugar maple outside my office. I love it. I’ve never been one to chain myself to a computer, and I’m not big on a rigid routine. I can write anytime, anywhere…but as you’ve observed, I do love a peaceful location. One of my favorite places to write is on the southwest Irish coast. Ireland is an easy flight from Boston and I haunt Aer Lingus for bargain airfares! I’ve gone several times on my own, writing in a tiny cottage (with a coal-and-peat burning stove!) and walking the hills. Walking at home in Vermont also inspires me. I love my office there, but I’ve found that I need to separate “business” and “creative” work. I need that immersion time, I guess.

Diane Capri:You recently returned from a trip to Ireland. Did you find inspiration for your new book Heron’s Cove there?

Carla Neggers: Yes, yes, yes!! And for Declan’s Cross, the third book in my Sharpe & Donovan series, which I’m writing now. It’s not just the Irish parts of Saint’s Gate, Heron’s Cove and now Declan’s Cross that my trips to Ireland have helped. Walking for miles and miles on my own in the Irish hills has helped me understand the characters of Emma Sharpe, a former nun, now an art crimes expert with the FBI, and Colin Donovan, a deep-cover FBI agent. They’re both from Maine (which I also adore!) but my writing retreats in Ireland helped me to understand them better. Oh, and there’s Finian Bracken, the whiskey expert Irish priest with a tragic past who ends up serving a small parish in Colin’s struggling Maine fishing village. Finian’s stolen more than one reader’s heart. I think he’s stolen mine, too. 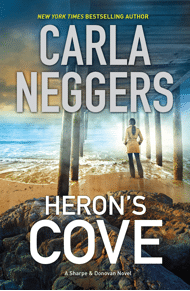 Diane Capri: Your new book features two FBI agents who are engaged in romance, right? What’s the FBI’s policy on, er, agent fraternization and how do you deal with it in Heron’s Cove?

Carla Neggers: Well…who cares? It’s fiction! 😉 Emma and Colin grew up a few miles from each other in southern Maine but worlds apart. She’s from a family of renowned art detectives. He’s from a family of cops and lobstermen. What can I say? I’m having loads of fun with these characters!

Diane Capri: Your official biography says that after graduating as valedictorian of your high school class, you studied music at Boston University. What was your instrument? Do you still play?

Carla Neggers: I started out as a performance major in French horn. I also studied piano. I took lessons and classes from members of the Boston Symphony Orchestra, including the fabulous, incredible, wonderful trumpeter Roger Voisin. It was a very special time in my life. I learned so much! I don’t play horn anymore (it sounds lousy if you don’t practice regularly!) but I do play piano, if not as well as I’d like. My music studies helped me with writing in countless ways. No regrets, although I did switch to journalism. Class Voice did me in. Never could sing. 😉

Carla Neggers: I can read French and a little German and Dutch, but my daughter’s friend Kristen married a Swede. His sisters wanted to read my books, so I sent them copies in what I thought was Swedish. Alas, it was Norwegian. They were so sweet, they told me the two languages really are so much alike.

Diane Capri: You sent me this fabulous photo and readers are wondering where this idyllic place is located and why it’s important in your life? 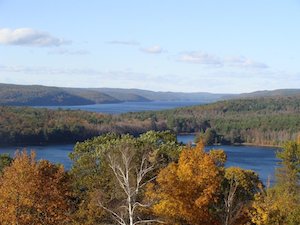 Carla Neggers: I’m a first-generation New Englander, the third of seven siblings. My older brother and sister were born in the Florida Panhandle, where my mother’s from. My father emigrated from the Netherlands after World War II. Quite a story how they ended up together. But I digress. I grew up in the small rural Massachusetts town of Belchertown, on the western edge of the vast Quabbin Reservoir (which plays a role in SECRETS OF THE LOST SUMMER). Few people know the origins of the name of my hometown: it’s named after Jonathan Belcher, a Colonial governor of Massachusetts.

Diane Capri: Thanks for taking a bit of time to chat with us on your publication day for Heron’s Cove, Carla! We’re celebrating with you and enjoying your success hugely! And look at this great trailerI found for your new book!

Carla Neggers:  Thanks, Diane! This was fun. I’m looking forward to reading your next books. Happy writing on your lake!