We’re celebrating today! Join us, won’t you? You can win some fun prizes and just generally have a good time. Come on over!

It seems I’m always thanking you for something, and today is no exception. You folks are amazing and I can’t tell you how much I appreciate all of your enthusiasm and support for my work! Thanks totally to my readers and with a lot of help from you, my friends, this month has been an amazingly wild ride so far and now I can honestly say something astonishing! (And scroll down to check out the BONUS, too!) Namely this:

Thanks to you, we can also say:

FBI Special Agents Kim Otto and Carlos Gaspar are back on the Hunt for Jack Reacher in this new short story available now! Download a sample or buy a copy CLICK HERE!

FBI Agents Kim Otto and Carlos Gaspar get a lead on Jack Reacher. New Hope, Virginia, welcomed him yesterday. Is he there now? Will Otto and Gaspar stand face-to-face with Reacher? Or Down Deep, is Reacher A Wanted Man? 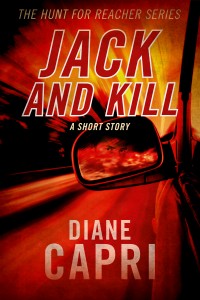 “Diane writes like the maestro of the jigsaw puzzle. Sit back in your favorite easy chair, pour a glass of crisp white wine, and enter her devilishly clever world of high skullduggery.” David Hagberg, New York Times Bestselling Author of Kirk McGarvey Thrillers

“I ‘stumbled’ on this title and was attracted to it as I am a Jack Reacher fan. Loved the story and the author’s writing style. Couldn’t wait for more so I purchased Annabelle’s Attack and want more Jennifer Lane – please?!Fatal Distraction is also on my Kindle to read list!”

“I have been a Reacher fan for years and was excited when I heard of Diane Capri’s take on “Finding Reacher”. “Don’t Know Jack” is a good companion to Child’s Reacher books and recaptures the flavor of the Reacher mystique. I am waiting anxiously for the next book in the series and the next and the next, and so on.”

If you’re interested in discovering new authors or in winning great prizes, check out thisSummer Splash Blog Hop where more than 80 indie authors have joined together to give you some great fun for the next week. Please leave comments on my page for opportunities to win copies of my books and character naming opportunities and more!

For those of you who are new to our list (thank you for joining us!) who’ve asked for more about Diane Capri:

Diane is the past Executive Vice President of International Thriller Writers, past member of the Board of the Florida Chapter of Mystery Writers of America, and active in Sisters in Crime and other writing organizations. She comes to writing after a successful legal career and is married to her college sweetheart. She loves her nomadic snowbird existence preferring perpetual summer migrating from Florida to Michigan each year.

Diane says she writes mystery and suspense for the same reason she reads: to find out what happens, why people do what they do, and how to bring justice to an unjust world. Her books are translated in more than twenty territories.

Diane loves to hear from readers. Connect with us to receive notice of new releases, subscribe to Diane’s blog, or simply connect with Diane HERE.

Thanks for reading and see you between the covers!