How to Survive a Rip Current Pt.2

As I do with each of my books, while I was writing Jack of Spades I did a ton of research. I can’t wait to hear what you think! 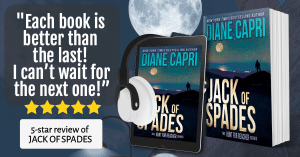 Last week I wrote about how to survive rip currents. These are long narrow channels of water that move away from the shore at high speed. Rip currents can develop in any body of water with breaking waves and for the average swimmer they can be difficult to spot. Although they are more likely to occur during bad weather, they can take place at any time and are especially common on the East, Gulf and West coasts of the USA between August and October.

At their most dangerous, rip currents can move as fast as 8 feet per second, taking even the strongest swimmers off guard. Rip currents are responsible for over 100 drownings each year, usually because swimmers try to fight them and become exhausted. 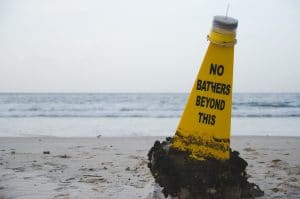 Today we’ll be looking into some real-life rescue missions.

On July 8, 2019, Roberta Ursrey and several of her family members were swimming at a beach in Panama City, Florida when her sons were suddenly caught in a rip current. Ursery and her family all jumped into the water and swam toward the boys, getting stuck in the current themselves. By this point, others who witnessed the situation had also become caught in the current while attempting to rescue the family.

Soon 10 people were stranded in water 25 feet deep with no lifeguard on duty. Over 80 strangers, some of who could not even swim began to work together to form a human chain.

The rescue lasted an hour and all 10 people were saved by these daring volunteers who put their lives on the line. Several of the victims went to the hospital but were stabilized. One had a heart attack while in the water while another blacked out. 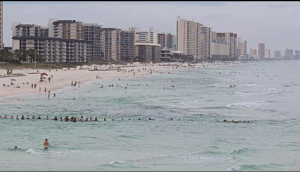 Less than a week later, a couple swimming at Panama City beach failed to heed the coast guard’s warnings to stay out of the water due to a high risk of rip currents being caused by Tropical Storm Barry. The couple became caught in a rip current and were stranded about 30 yards from the shore. Several people jumped into the water attempting to save them only to get caught in the current themselves. Around thirty other bystanders began to form a human chain in an attempt to reach the couple. However, it was trained rescuers who eventually reached the swimmers and were able to bring them back to safety.

Authorities warn that although jumping to the rescue may seem heroic, it often hinders the rescue team who will likely have to risk their own lives to help not only those who were stranded but also those who had attempted to help. Whenever possible swim at a beach with a lifeguard present and always check for rip current warnings before you enter the water.

How does all of this relate to Jack of Spades?  Read to find out!

How to Survive a Rip Current Pt.1
What about windsurfing? Pt. 1