Like many of my thrillers, The Hunt For Jack Reacher Series focuses on catching the killer. But what happens when the killer leaves a messy trail behind him? After investigators have collected evidence and analyzed the crime scene, someone must clean up what is left behind.

In BLACK JACK, a serial killer is on the loose. Otto and Gaspar are on a mission to find the green paint bathtub killer. The elusive murderer not only leaves tragedy in his wake but also potentially toxic messes. Oil paint can cause severe poisoning when it is inhaled or ingested. Cleaning up this crime scene isn’t a task for just any person. 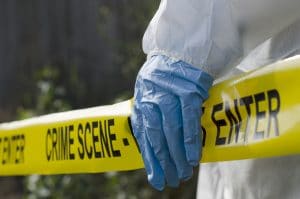 Crime scene cleaners, also known as hazardous waste removers, are not involved in any part of the legal proceedings regarding the crimes that they clean up. Instead they play a vital role in helping victims and communities heal from tragic crimes or accidents.

In the past, family members or even victims were expected to clean up in the aftermath. Fortunately, crime scene cleaners are now available to take over this messy and potentially traumatizing task. On call 24/7, these individuals help create a sense of normalcy in the space where a crime had been committed. This is especially true if a murder or other tragedy took place in a person’s home, a place of business or other public space.

Cleaning up crime scenes is not for the faint-hearted. Individuals must be prepared for long hours and a sporadic schedule. On any given day a cleaner may be stationed at a former drug lab, hotel room or holding cell. Working conditions are often less than ideal because some job sites may not have electricity, water or adequate lighting. In some cases, the damage is so extensive that buildings need to be stripped down to the studs. 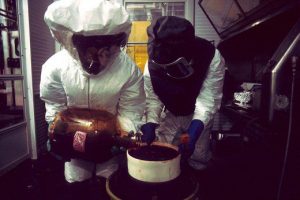 Cleaning up a crime scene can be a delicate mission because it may entail the disposing of combustible chemicals and poisons. Another uncomfortable reality of this job is the disposing of bodily fluids and organs that potentially contain communicable diseases. Cleaners must work quickly and carefully while wearing bulky protective gear. Despite these precautions, workers still face the risk of breathing invisible toxins or accidentally coming into contact with contaminated needles.

It goes without saying that crime scene cleaning is not your average nine to five job. Hazardous waste removal is a growing industry, although with a high turnover rate. Many people enter this field only to quit hours into their first site. This career requires brains, brawn, and a stomach of steel. Do you think you’re up for the task?

Agents Otto and Gaspar know that with a serial killer on the loose, jobs like this won’t disappear anytime soon.

How many times will the green paint killer get away with murder before the FBI finds a way to stop him? Read BLACK JACK to find out! 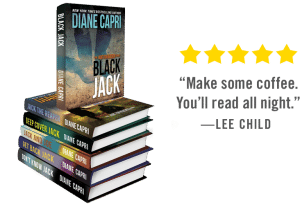 THE DANGEROUS SIDE OF DNA
MYSTERIOUS MURDER WEAPONS