Travel to Gibraltar: The Pleasures and Perils

By Diane on March 2, 2018 in Beyond The Covers, Blog, Jess Kimball Thrillers

In Fatal Bond of my Jess Kimball Thriller Series, Jess takes a road trip to Gibraltar enroute to Africa. She recognizes the famous Rock of Gibraltar but then is immediately on her way to Africa with no time to enjoy the pleasures — or experience the perils — of Gibraltar.

Gibraltar is British territory at the tip of the Iberian peninsula with the famous Rock of Gibraltar acting as a military base. The saying “Solid as the Rock of Gibraltar,” meaning any substance that was very safe or firm, became popular during World War II when the rock was used to conceal men in many of its 100+ caves. Today tourists can venture through some of these tunnels, known as galleries, in the rock. From some of these hallways, you can see view of the Bay of Gibraltar- and even Spain. Gibraltar also has a great cultural museum that explains the history of the territory and the natural history of the territory. Currently 40 percent of Gibraltar is natural reserve. On a visit, you might get lucky and see one of the Barbary macaques — also known as “rock apes.” 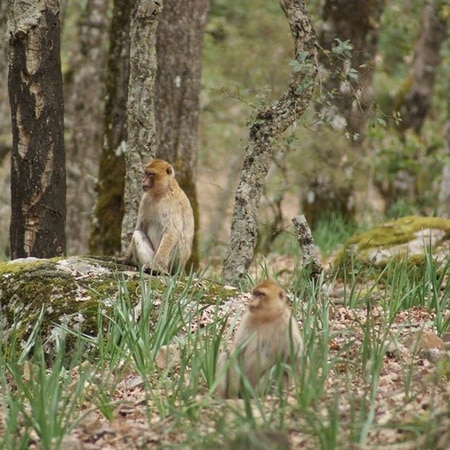 Gibraltar also has some fine dining pleasures. Their specialties include spinach tortillas and calentita and panissa- which are like quiche but made with chickpea flour. Gibraltar also loves its wine — there is a yearly wine festival that happens in September with vendors, music and free flowing wine. Locals sidle up the bars and enjoy the tasting and outdoor atmosphere.

But alongside its pleasures, Gibraltar has its share of perils. In Fatal Bond, Jess Kimball isn’t around in Gibraltar long enough to experience them, but authorities warn tourists of risk including pick pockets, bag snatchings, and to not walk home alone at night. Their kidnapping rates show a very low risk too. The surrounding countries of Morocco and Western Sahara also pose a low risk. Gibraltar’s public crime docket contains a murder trial mixed in with mentions of the newest trainings police have attended, next to fraud and GHB charges.

From Gibraltar, Jess headed onward to Africa. What pleasures or perils awaited her there? Stayed tuned for the 3rd part of our series.