Have You Read Them All? Hunt For #JackReacher Series

By Diane on December 14, 2017 in Beyond The Covers, Blog, Hunt for Jack Reacher

Have you read all the books in the Hunt for Jack Reacher Series? Recommended by Lee Child, “Kim Otto is a great, great character. I love her. Make some coffee. You’ll read all night.” 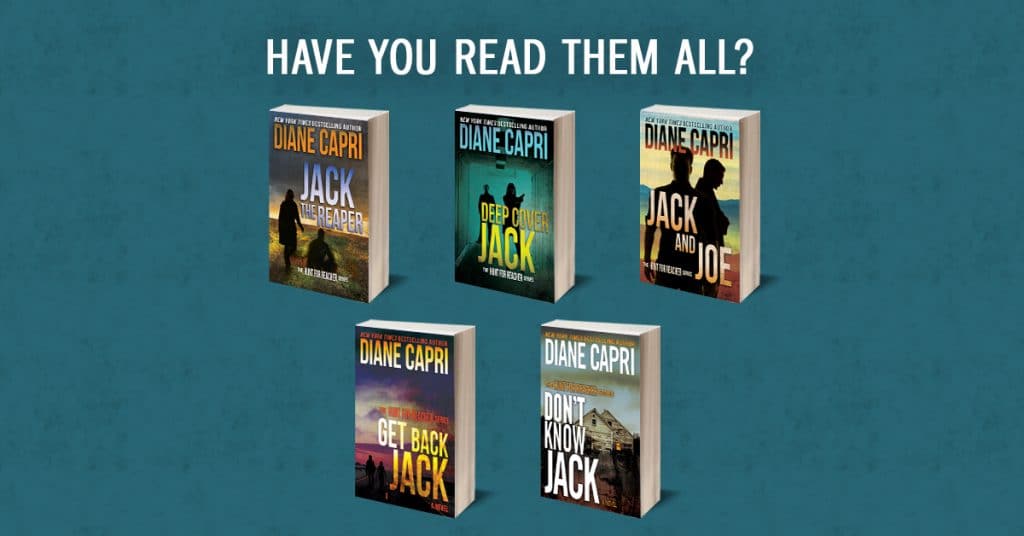 As of October 2017, there are five full-length novels in the Hunt for Jack Reacher Thriller Series.

Have you read them all?

It’s been a while since we first met Lee Child’s Jack Reacher in Killing Floor. Fifteen years and sixteen novels later, Reacher still lives off the grid, until trouble finds him, and then he does whatever it takes, much to the delight of readers and the dismay of villains. Now someone big is looking for him. Who? And why? Hunting Jack Reacher is a dangerous business, as FBI Special Agents Kim Otto and Carlos Gaspar are about to find out. Otto and Gaspar are by-the-book hunters who know when to break the rules; Reacher is a stone cold killer. Reacher is a wanted man, but is he their friend or their enemy? Only the secrets hidden in Margrave, Georgia will tell them.

FBI Special Agents Kim Otto and Carlos Gaspar’s off-the-books assignment leads them to the surviving members of Jack Reacher’s elite military unit. Five years ago, Reacher sorted and destroyed a team of arms dealers in Lee Child’s Bad Luck & Trouble before he moved on. But he made mistakes. Now, his bad luck and trouble legacy plunges Otto and Gaspar into the minefield of a grudge war between Reacher’s fearless old friends and chilling new enemies.

When his enemies take women and children hostage for ransom, Kim’s relentless pursuit leads her deeper into the deadly war Reacher failed to finish. Mercenaries and Kim’s unwavering heart push her through — until she meets the wrong woman with nothing to lose.

In the thrilling followup to the ITW Thriller Award Finalist (“Jack and Joe”), FBI Special Agents Kim Otto and Carlos Gaspar will wait no longer. They head to Houston to find Susan Duffy, one of Jack Reacher’s known associates, determined to get answers. But Duffy’s left town, headed for trouble. Otto and Gaspar are right behind her and powerful enemies with their backs against the wall will have everything to lose.

After Jack Reacher handled things The Hard Way, FBI Special Agents Kim Otto and Carlos Gaspar are dispatched to find out whether Reacher is dead or alive. But they aren’t the only ones who want to find Reacher this time. A corrupt Army General is on the hunt, too, determined to make sure Reacher reaps what he sowed. Reacher’s friends Brewer and Pauling are in the crosshairs. When powerful enemies with their backs against the wall will stop at nothing to make Reacher pay, can Otto and Gaspar find the secrets Reacher left behind to keep his friends alive?

You can get a comprehensive look at the Hunt for Jack Reacher Series HERE.

Join the hunt and read them all!

“Full of thrills and tension – but smart and human too.”
-Lee Child, #1 World Wide Bestselling Author of Jack Reacher Thrillers

A Great Deal Wrapped in a Good Deed
There’s Time For One More Book in 2017!