By Diane on August 22, 2017 in Beyond The Covers, Blog, Hunt for Jack Reacher

Did you ever read The Hard Way by Lee Child? Lee Child is not only my friend but also one of my favorite authors, so of course I’ve read The Hard Way, his 2009 release, multiple times. Especially because the book is the source material for my upcoming Hunt for Jack Reacher Thriller, Jack the Reaper.

If you’ve read The Hard Way (and if you haven’t, I highly recommend it!!), you’ll remember that some of the action revolves around The Dakota. 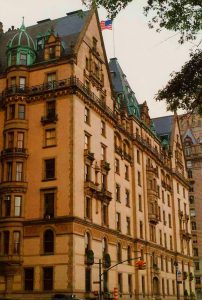 Business Insider describes The Dakota as “one of Manhattan’s most mysterious and exclusive residences.” I was at The Dakota just last month, and I can attest to its larger-than-life vibe.

The Dakota dates back to 1884 and sits at the corner of 72nd Street and Central Park West. It’s been home to oodles of celebrities, including, of course, John Lennon who was tragically shot just outside. HIs widow, Yoko Ono, still lives there. She recently celebrated her 84th birthday!

Here are nine interesting facts you may not know about The Dakota:

A building with such a rich history is just asking to be included in a book, don’t you think? I can’t blame Lee Child for making The Dakota a part of The Hard Way. And, of course that means The Dakota features prominently in Jack the Reaper, too.

What building would you love to see included in one of my upcoming books? Leave a comment and let me know — I’m always open to suggestions!

How To Get The Newest Hunt for Jack Reacher Book ASAP
Hired to Do the Impossible: Can Michael Flint Find The Man and Save the Boy?