Update in the Case of Missing Child Etan Patz

By Diane on June 6, 2017 in Beyond The Covers, Blog, Jess Kimball Thrillers, True Crime

With the new release of a couple Jess Kimball thrillers, the exciting short read Fatal Edge, and, more recently, a new novel Fatal Game, I’ve been thinking about a subject that pervades all of my Jess Kimball books — missing children. It’s a devastating topic, of course, but it’s what drives Jess Kimball. She won’t rest until she’s found her son, who was kidnapped as an infant. Jess Kimball’s job as an investigative journalist for Taboo Magazine keeps her fighting along the way for victims’ rights.

While thinking about this, and while pondering what’s next for Jess Kimball, I noticed that there was a recent update in the real-life case of Etan Patz. Do you remember him? He was the first missing child to have his face on a milk carton.

Etan disappeared in Manhattan in 1979 at age six. He was walking from his family’s apartment to a bus stop just two blocks away, by himself for the first time. He was carrying a bag full of Matchbox cars and a dollar to buy a Coke. He never made it to the bus. 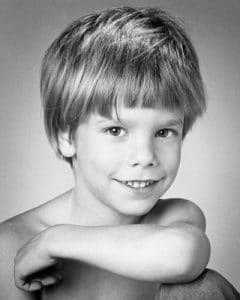 Etan’s father was a photographer, so he had high-quality photos of Etan readily available. He and his family plastered the pictures on posters all over the city.

Etan was never found. He was declared legally dead in 2001.

There was a suspect — Jose Ramos — who was a friend of one of Etan’s babysitters and who was a convicted child sexual abuser. But he was never prosecuted in the case, though he did end up spending 20 years in prison for a different child molestation charge.

The latest development began in 2012, when police got a confession from a man named Pedro Hernandez who, according to The New York Times, confessed to strangling Etan.

Pedro Hernandez in court in 2012. Photo by Louis Lanzano

Hernandez’s attorney argued that his client had a personality disorder and an IQ bordering on mentally disabled. However, the New York Supreme Court ruled the case could go to trial. Hernandez pleaded not guilty to the kidnapping and murder.

The first trial ended in a hung jury in 2015. Following the second trial, in February of 2017, a jury found Pedro Hernandez guilty of kidnapping and murder. Just this spring, on April 18, 2017, Hernandez was sentenced to 25 years to life in prison without parole.

“The defendant kept a terrible secret for 33 years. His silence caused the Patz family indescribable anguish and served to compound their grief.”
–Justice Maxwell Wiley

This is the kind of justice Jess Kimball works for. She will forever side with victims, like the parents of Etan Patz, and fight for justice for them. She would also, no doubt, be forever appreciative of the Patz family and the strides they made in raising awareness for missing children, even helping lead to the start of the National Center for Missing and Exploited Children.

Why does Jess Kimball try so hard?
Escape to Florida With Me!