Why does Jess Kimball try so hard?

Fatal Game released two weeks ago and so far, the reviews are stellar. Whew! I’m always nervous while I wait for the early responses, you know? This book features everyone’s favorite intrepid journalist, Jess Kimball. 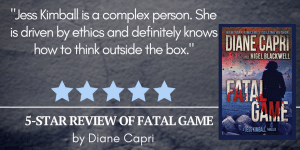 I started writing about Jess several years ago after a friend suggested a great true crime book by Dominic Dunne. If you’re not familiar with him, Dunne was a journalist who wrote for Vanity Fair magazine, among others. His specialty became reporting on high profile criminal cases, usually involving the rich and famous. At that time, he was reporting on the very old Martha Moxley case, which had been reopened after his investigations revealed that one of the Kennedy clan could have been the killer. A conviction resulted when the defendant went to trial.

Dunne fascinated me. He was a very high-profile guy who covered many famous cases, including the O.J. Simpson case. And he’d taken on something close to a crusade for justice. I thought then, and still believe, Dunne was a hero for doing this job.

Dunne’s motivation for investigating and writing these articles was a personal one. His own daughter was murdered and the defendant’s sentence for voluntary manslaughter was six and a half years, but he only served two and a half. Dunne felt his daughter didn’t get the justice she deserved and he set out to prevent the same kind of thing from happening to other families. 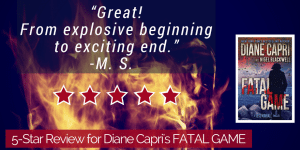 My Jess Kimball is a fictional, younger, female version inspired by Dominic Dunne. She writes for the high profile (fictional) magazine, Taboo. Her personal motivation? Jess’s son was taken when he was an infant and she was little more than a child herself. Since then, she’s been searching for her boy. To keep the search alive and Peter’s case in the public eye so that people will remain aware and keep a look out, she investigates cases where victims rightly feel they haven’t received proper justice.

Fatal Game is Jess’s fifth novel (there is a prequel novella and another short read between novels four and five). This time, a heart surgeon is convicted of murdering his wife. But he claims he didn’t kill her. In fact, he claims his wife isn’t really dead.

This is exactly the kind of case Jess takes on, so she gets right to work. What follows is a page-turning story that will keep you up all night! If you decide to give Jess a try, lock the doors and make some coffee — and please write to me and let me know what you think!

To buy Fatal Game at any retailer: books2read.com/FatalGame

For more about all of the Jess Kimball Thrillers Series: CLICK HERE 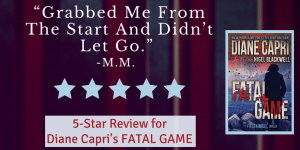 Well this is exciting… Cast your vote!
Update in the Case of Missing Child Etan Patz