By Diane on October 18, 2016 in Beyond The Covers, Hunt for Jack Reacher

If you’re like me, you have Friday, October 21, 2016 circled on your calendar. Why? It’s the new Jack Reacher movie! 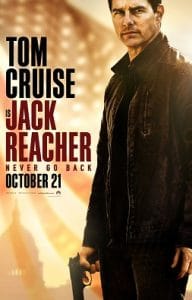 Never Go Back is the sequel to the 2012 film, Jack Reacher, set four years later. This time, Jack Reacher is accused of an old murder. A government conspiracy may be behind the accusation.

Did you read the book? The movie is based on the book by the same name, written by my friend Lee Child.

As you know, besides being a Lee Child fan, we are friends and colleagues. My Hunt for Jack Reacher Series has Lee’s full blessing and support, of course.

I can’t wait to see the movie, but in the meantime I’ve been curious to hear what Lee Child thinks of it. Let’s see what clues we can squeeze out of him, shall we?

Lee told Entertainment Weekly that it was a great cast and crew, in a very productive atmosphere. When asked what part he was most excited to see onscreen, Lee said,

“Part of the story is a 16-year-old girl, who might (or might not) be Reacher’s daughter. At the read-through of their final scene together, Tom Cruise and Danika Yarosh gave me major goosebumps. Can’t wait to see that in the final version.”

As for being on set during the filming, CBS News asked him if he has any sort of directorial powers over, say, Tom Cruise, who plays Jack Reacher.

“Yeah, he would certainly listen if I said something. But I don’t want to say something. I mean, I believe that I wrote the book; they made the movies. Every time, I say to them, I’m not gonna look over your shoulder, I’m not gonna be making comments. And I think then they relax, and you actually get a better product.”

What does Lee Child think about the choice to cast Tom Cruise as Reacher? Lee says Cruise got the character down: “He’s got that kind of menace and that kind of quiet about him.”

Have you seen the movie yet? Do you plan to? What did you think? Leave a comment and let me know!

Cloudy Day? No Problem For Some Spies…
What is The Problem with Wild Mega Hogs?