Cloudy Day? No Problem For Some Spies…

By Diane on October 13, 2016 in Beyond The Covers, Hunt for Jack Reacher

Anybody who’s seen the movie Eye in the Sky has had a glimpse into how advanced military and government surveillance is. Just check out my blog post here to see how drones that look, act, and sound like insects can gather top secret information.

Drones are great for invading small or dangerous spaces. But there’s another approach to stealth surveillance — doing it from extreme distances. No longer do government officials on reconnaissance missions have to sit in parked cars and use binoculars. For a price, powerful people can have satellites do the job.

So just how high can we send devices into the air and still see tiny details of things that are happening amid life on earth? In my Hunt for Jack Reacher thriller Deep Cover Jack, military and government satellites show us how it’s currently being done.

In Deep Cover Jack, it’s important that satellites be able to see through cloud cover: 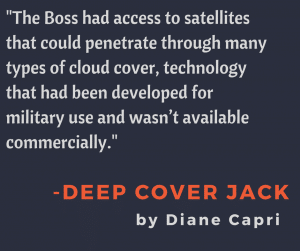 The satellites use infrared technology, which senses the temperature of all objects, including water and land below clouds. Those temperatures are emitted back into space for the satellite to read. So clouds usually wouldn’t pose a problem.

Advanced satellites can even make out details like individual players on a baseball diamond and specific minerals in the ground.

Why does Deep Cover Jack need satellites for surveillance? Take a peek at the book to find out HERE.

C-4: Proof That The Hunt for Reacher Is Deadly
Lee Child on New Reacher Film, “Never Go Back”