C-4: Proof That The Hunt for Reacher Is Deadly

By Diane on October 11, 2016 in Beyond The Covers, Blog, Hunt for Jack Reacher

Hunting Jack Reacher is deadly business. You know that’s the case in all of my Hunt for Reacher thrillers, right?  Deep Cover Jack continues that promise and C-4 is involved.

So, what do you know about the chemical explosive C-4? If, like Jack Reacher, you have a military background, you probably know a lot. I needed to get up to speed on C-4. Where did this explosive come from and how did it become so ubiquitous, I wondered?

In the case of Deep Cover Jack, one thing that got me thinking was that C-4 wasn’t invented until 1958. In World War II, when what would essentially be “C-1” was developed by the British. As it developed into C-4 by 1958, it became more stable and safer to store. Now, the use of C-4 is downright common. It’s used by good guys and bad guys alike.

U.S. Armed Forces use it to demolish walls and break into buildings. C-4 based bombs and grenades have been used as anti-personnel weapons. During Operation Joint Guard, a U.S. Army unit detonated C-4 explosives inside this Serbian battle tank: 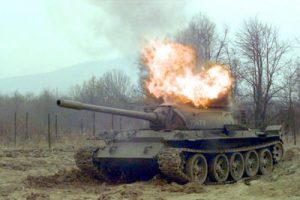 C-4 is used by military and private contractors because it’s so stable and resistant to shocks. Not even a gunshot sets it off. Extreme heat and a shockwave is required. Something like a detonator. C-4 can be easily shaped and molded, both to shape direction of the explosion and to fill gaps, holes, and cracks in structures and equipment. In the video below, you can see for yourself just how malleable and stable C-4 is.

The military uses C-4 as an explosive but terrorists also use it. Even the Al-Qaeda handbook recommends it. According to the U.S. Department of Homeland Security, “terrorists are likely to resort to theft or attempt to smuggle C-4 into U.S.” Kim Otto and Carlos Gaspar are aware of that in Deep Cover Jack: 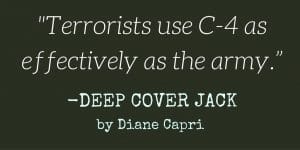 So who comes out ahead in Deep Cover Jack?
You can learn more about C-4 and the role it plays in the Hunt for Jack Reacher in my newest release in the series — Deep Cover Jack.

Can Personality Help Track Down Ancestors?
Cloudy Day? No Problem For Some Spies…