Can Personality Help Track Down Ancestors?

By Diane on October 6, 2016 in Beyond The Covers, Heir Hunter, Michael Flint

You’ve heard of ancestry.com, right? The website traces relatives, finding connections to people you didn’t know existed or — in the mind of this mystery writer — people who have gone missing.

My new Heir Hunter series works off of a similar idea. Former covert operative turned high-end private investigator, Michael Flint, steps in when the job is urgent, dangerous, and requires deeper investigation than a computer search. His job, in short, is to beat the clock and track down missing relatives, some of whom could be hiding for good reason.

When we talk about tracing relatives, one of the most accurate ways we can do it is through DNA.

But can we possibly identify relatives based on personality traits stored in DNA? 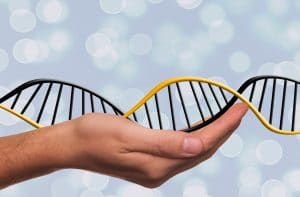 Some say our personalities change or stay the same based on our situation. For example, a woman may act one way in her role as a grandmother, a different way in her role as a boss, and a completely different way when she’s relaxed with friends. Others say we could explain the belief that an honest person is always an honest person as an illusion. In other words, it is easier for us to put people into boxes than to admit that their personalities may be inconsistent. The person who believes this would subscribe to the notion that no matter how people behave, we shoehorn them into the idea we already have of them.

“It’s no wonder that we’re drawn to this idea that personality is important and stable. It makes us feel better.” – Walter Mischel, psychologist

So what does this mean for Michael Flint’s heir hunting? Does DNA determine personality, or is personality totally changeable based on environment or perception? Should Flint consider personality in his DNA research? Does a leopard ever change it’s spots?

What say you? Do you think personality traits can be inherited??

Meet the Heir Hunter of Last Resort: Michael Flint
C-4: Proof That The Hunt for Reacher Is Deadly