By Diane on October 4, 2016 in Beyond The Covers, Blog, Michael Flint

Today is the day you can officially meet Michael Flint, Heir Hunter of Last Resort.

Michael Flint is the star of Blood Trails, the first in my new Heir Hunter thriller series published by Thomas and Mercer, officially released today! Blood Trails is available NOW in ebook, paperback, and audiobook from Amazon!!! 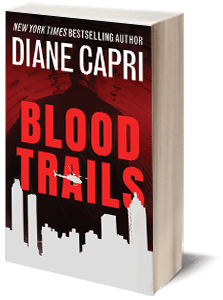 When I write new books, sometimes it seems half the battle is selecting character names. Names are destiny, after all. So I’ll tell you what’s behind Michael Flint’s name, and that may give you a better idea of what’s in store as you embark on Blood Trails and the upcoming books in the Heir Hunter Series.

For one thing, did you know that the exact mode of formation of flint, which is a form of hard quartz, is unclear? And my man Flint is a man of unknown origin, which is something that drives him and drives his books.

Also, flint has been used as a tool for centuries because it splits into sharp splinters called blades when struck by another hard object. Indeed, striking flint can cause sparks and ignite fires. Perfect description for my man Flint. 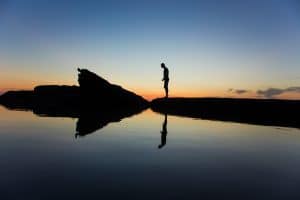 And then, of course, there’s the flintlock. A piece of flint held in the jaws of a spring-loaded hammer, when released by a trigger, strikes steel and creates sparks that ignite an explosion. Flint is exactly like that. Be aware.

When it came to choosing his first name, I wanted something that was two syllables to go with the short, clipped, hard and sharp “Flint”, and a name that would work with his own uncertain origins. After much debate, I settled on Michael. Michael Flint. Why “Michael?” We’ll save that story for another post.

Meanwhile, if you like a former clandestine operative turned private investigator with a mercenary streak — and a heart of gold — you’ll love Michael Flint. Check him out!

From Fiction to Nonfiction and Back Again
Can Personality Help Track Down Ancestors?