What Makes A Place Home?

Jess Kimball begins her most recent investigation in Winter Park, the city President Chester Arthur once declared “the prettiest place I have seen in Florida!”

Winter Park is a suburb of Orlando, originally a resort town. Its developers required all buildings to look a certain way. They planted orange trees and worked hard to promote their city, which boasted lovely views of lakes and a certain sense of community. If you go there today, you’ll pick up on that intentional “resort” vibe, a place that was designed to be a destination. A city developed with pride, cohesion, and intentionality.

Downtown Winter Park Historic District is listed on the National Register of Historic Places. That means that at least 60% of the structures in that area were built between 1882 and 1965. And they tell a story. 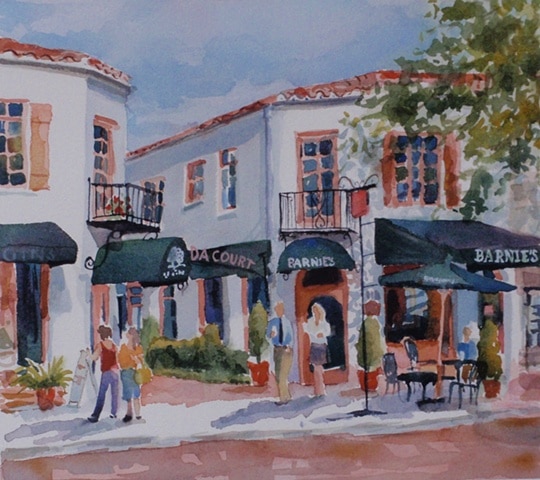 For example, there’s Greenada Court, designed by the famous Florida architect James Gamble Rogers II, featuring a Mediterranean court with a brick walkway and fountain. It’s depicted in the above watercolor painting by Edie Fagan.

What Jess Kimball sees is characteristic of the entire Downtown district:

“Jess pulled up in front of a modest bungalow… complete with loads of curb appeal and a white picket fence… Unlike some old houses, this one had a comfortable vibe that came from a lifetime of care taking.”

For Jess, this is an unfamiliar experience. Her apartment serves only as temporary storage while she searches for her son, Peter, who was taken from her apartment ten years ago. She wonders what it would be like to live with Peter in a place that’s truly home. Maybe a place like Winter Park, where buildings are more than just structures.

Do you know the answer from experience? What does “home” mean to you?

3 Terrifying Kidnapping-For-Ransom Cases
What Are The Dog Days of Summer?

2 Responses to What Makes A Place Home?