Have you heard about the real estate investor traveling the world to give away money to lucky scavengers?

He started his game by hiding envelopes of cash around San Francisco and tweeting clues about their locations under his Twitter handle @HiddenCash. Whoever finds the cash gets to keep it. Simple as that.

Originally, the benefactor was anonymous. But we now know his name is Jason Buzi, he’s a real estate investor from California, and he’s actually just one member of a team of people operating the Twitter handle @HiddenCash.

USA Today reports that Buzi found himself with millions of dollars on his hands, and decided he wanted to give a lot of the money away.

Some of it is going to charity, but he says he also wants to have fun with it – so he’s hiding envelopes of $20 and $100 around the world. He’s starting off in larger cities, but plans to visit smaller towns as well. He hopes the game will bring people together and encourage people to give back.  Is it working?

Buzi and his team started out in San Francisco, then expanded the giveaways to cities including New York, Houston, Las Vegas, and Chicago. He even extended his reach to Mexico. Some of the latest hints are that Hidden Cash is going to Japan, Korea, Taiwan, and Europe.

If you use Twitter, you can follow @HiddenCash for clues about upcoming cash drops. Here’s one such clue: 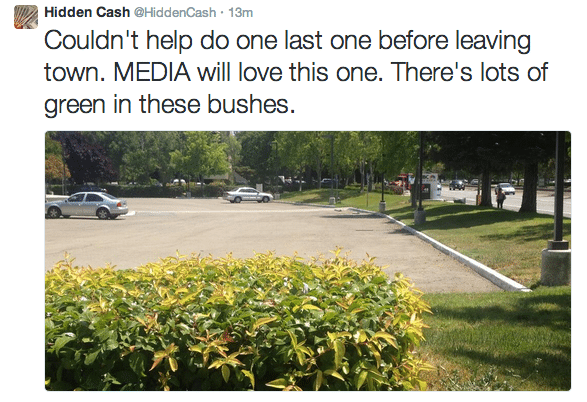 As long as you’re on Twitter looking for hidden cash, I hope you’ll follow me, too! I’m @DianeCapri.

For those of you who don’t use Twitter or who live in an area not visited by @HiddenCash, you can always subscribe to my newsletter for a monthly chance to win a $100 gift card! (No worries — we don’t do spam!)

Good luck to all you cash hunters!

Saturday Special: If Only We Knew…
When Life Hands You Lemons (Part 1)

4 Responses to Who Wants Free Money?