Today, it’s my pleasure to feature indie author Amy Shojai. I met Amy this year at ThrillerFest in New York after getting to know her online. Regular readers of Licensed to Thrill know I’m a dog lover and Amy’s online bio intrigued me. Why? Because this author knows her dogs. Check out her official author photo: 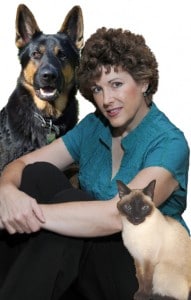 Amy with Magic and Seren

Amy’s a certified animal behavior consultant, and the award-winning author of 26 best-selling pet books that cover furry babies to old-fogies, first aid to natural healing, and behavior/training to Chicken Soup-icity. She is the Puppies Guide at puppies.About.com, the cat behavior expert at cats.About.com, and hosts a weekly half hour Internet Pet Peeves radio show.

Amy’s also been featured as an expert in hundreds of print venues including The New York Times, Reader’s Digest, and Family Circle, as well as national radio and television networks such as CNN, Animal Planet’s DOGS 101 and CATS 101. She’s been a consultant to the pet products industry and a host/program consultant for select “furry” TV projects.

She lives in North Texas with a smart aleck German shepherd named Magic, and a Siamese wannabe named Seren. Amy brings her unique pet-centric viewpoint to public appearances, writer conferences keynotes/seminars, as a playwright and in her Thrillers With Bite!

Diane Capri: You didn’t start out to have a writing career, right?

Amy Shojai: I call myself the “accidental pet writer” since I had plans to star on Broadway (ahem). I play piano and cello, but voice/theater was my double major in school. That didn’t work out so well. It turns out the commute from where we lived in Eastern Kentucky to New York was beyond my pocketbook, go figure, so I got a job as a vet tech. My interview took place during a Chihuahua’s C-section! Yes, I was handed puppies to resuscitate as we discussed potential work schedule and salary. I got the job in part because I didn’t pass out.

Diane Capri: But all of that led to writing somehow. 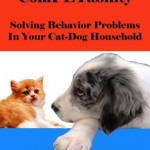 Amy Shojai: I always wanted to write fiction, but my first success came in nonfiction. I published my personal experiences as a vet tech in the “pet press” after I discovered that people want do their best for fur-kids but often make mistakes. When I submitted an early novel to one agent, she declined (THANK GOD! It was AWFUL!) but asked me about writing nonfiction books.

Diane Capri: And this turned into the writing life?

Amy Shojai: I made a career out of (to-date) 26 pet-care books and several thousand articles and columns. It’s incredibly gratifying to hear back from readers that my work helped save a pet relationship.

Diane Capri: Give us an example.

Amy Shojai: Once, at a book signing at a cat show, a tearful couple approached me to thank me for writing the first aid book since it saved their dog’s life the previous month. Wow!

Diane Capri: What about all of that pre-writing life experience?

Amy Shojai: As it turns out, the performance experience has been very helpful with appearances in association with my writing career and serving as a “voice” for the cats and dogs. So I don’t feel as guilty about my folks footing the bill for my college degree. *laughs*

Diane Capri: You have new book just out on September 20, 2012, from Cool Gus Publishing called Lost And Found. This is your first thriller. I’m guessing it features an animal behaviorist and a few pets in the story, hmmmm? 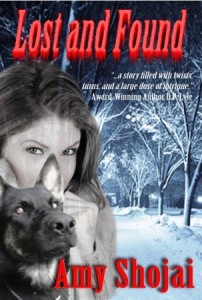 Amy Shojai: *grins* I’ve always been a fan of thrillers and now I write Thrillers With Bite! Pet people love to speculate about what and how their fur-kids “think” and why they act the way they do. But pets perceive the world very differently through their unique senses, so as a behavior expert I wanted to include my own take on such things.

Diane Capri: How did you do that in Lost and Found?

Amy Shojai: Lost and Found includes “dog voice” as well as a trained Maine Coon hero cat that literally nails one of the bad guys to help save the day. Writers will appreciate this–the dog Shadow has his own character arc.

Diane Capri: What’s the book about?

Amy Shojai: An autism cure will kill millions unless a service dog and his trainer find a missing child . . . in 24 hours. An aunt searches for her lost nephew—and dooms her sister. A mom gambles a miracle will cure—and not kill—her child. And a dog finds his true purpose—when he disobeys.

Amy Shojai: Animal behaviorist September Day has lost everything—husband murdered, career in ruins, confidence shot—and flees with her Maine Coon cat Macy to Texas to recover. She’s forced out of hibernation when her nephew Steven and his autism service dog Shadow disappear in a freak blizzard. When her sister trusts a maverick researcher’s promise to help Steven, September has 24 hours to rescue them from a devastating medical experiment impacting millions of children, a deadly secret others will kill to protect. As September races the clock, the body count swells. Shadow does his good-dog duty but can’t protect his boy. Finally September and Shadow forge a stormy partnership to rescue the missing and stop the nightmare cure. But can they also find the lost parts of themselves?

Diane Capri: You have a treat for us, too. Take a look at this trailer for Amy’s book Lost and Found:

Diane Capri: *laughs* It certainly does! Where are your fans most likely to find you hanging out?

Amy Shojai: I’m online virtually all the time—except when the Magical-Dawg and Seren-Kitty pry me away from the computer. I spend a lot of time on Facebook and interact with fans in comments at my Bling, Bitches & Blood blog. (Yes, I’m addicted to bling and the blog includes not only writer-icity and pet-centric content, but lots of shiny stuff).

Diane Capri: Is there one passage in Lost and Found that you feel gets to the heart of your book and would encourage people to read it?

Amy Shojai: As a preamble, I have to admit that I don’t have two-legged kids. Pets are why I was put on this earth. So maybe this strikes a deeper chord with me than with others but this section to me is the heart and soul of the book, in the dog Shadow’s viewpoint, after he and September have been put through the ringer and at last are safe:

“Good-dog, Shadow.” September hurried to the tangled pair and knelt beside them. “What a smart dog, good boy.” She reached to touch Steven, hesitated, and stroked Shadow’s brow instead. “Good boy, such a good boy.”

Shadow thumped his tail, licked her hand. She tasted of tears and pain, blood and joy. Nothing else mattered, not his ball, not his bear, not even his boy. Nothing mattered, only this. Approval in her voice. Her touch. Her scent.

Sudden sunlight spilled through the bars of the stained glass windows and bathed the room in a warm peacock glow. The storm had ended.

Shadow’s hurts didn’t matter, not anymore. Home wasn’t a place. Home was a person. And Shadow was home.

Diane Capri: Now there’s a unique angle in the book dealing with stained glass in some way. Tell us about that table. 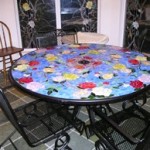 Amy Shojai: I love stained glass, and our home has lots of stained glass panels and lamp shades that I’ve made. We also have about 700 antique roses that surround the house so roses figure in a number of the designs. I got the idea to use stained glass in mosaic for a table top design, and made two table tops—one outside on a cast cement patio table, and this one in the picture that serves as our kitchen table in the breakfast nook. (You can see a bit of the floor-to-ceiling rose glass panels behind the picture). I can’t remember how many glass pieces are in this table but probably a couple of thousand. Lost and Found features the table and the antique roses that surround September’s house. Her brother is a stained glass artist. He’ll appear in future books, too.

Diane Capri: Thank you for chatting with us today, Amy, and if folks want to connect with you, where can they find you?

Amy Shojai: Here are a few links and I hope everyone will come over to my website: http://www.shojai.com Or visit my blog: Bling, Bitches & Blood

Diane Capri: Thanks, Amy. And don’t forget to visit Amy on Facebook: http://www.facebook.com/AmyShojai.CABC or