Sure, I’m Licensed to Thrill, but hanging with thriller writers feels more than a little dangerous. Last week the ThrillerFest schedule was released and I learned I’ll be putting my life on the line again this year. Think I’m exaggerating? Um, not so much. See, I found out who my panel leader is and believe me, this guy is licensed to kill. (Check out the photo below if you don’t know about his, um, accomplishments….)

What do Robert Doherty, Debbie Cavanaugh and Robert Mayer have in common? Here’s a hint, right in the center of this target: 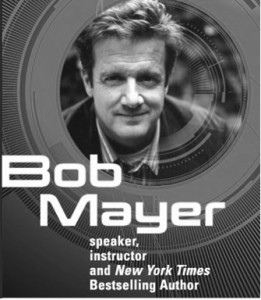 Bob Mayer has quite a resume, which may be why he needed all those pen names. It’s hard to imagine one man accomplishing everything he’s done before the age of 90!

He’s sold millions of books around the world, hitting the NY Times, Wall Street Journal, Publishers Weekly, USA Today and other bestseller lists in thriller, science fiction, suspense, romance and non-fiction. You may have seen him on PBS or the Discovery Channel, or heard him on NPR. He’s also been featured in USA Today, The Wall Street Journal, Sports Illustrated and Army Times as an expert consultant.

Whew! Just saying all of that makes me tired, and I’m not done yet. But that’s enough to get us started. I’m thrilled to have with us here today, my friend Bob Mayer.

Diane Capri: Bob, you’ve got to slow down a bit. You’re making the rest of us look bad. I mean, how can we tell our readers we’re working hard on our next book if they hear about your schedule?

Bob Mayer: I work two jobs: publisher and writer. I literally have two offices in my house. A nice built-in that came with the house that has Internet. That’s where I’m a publisher. Then I get up, walk down the hall to the other side of the house where there’s a room with just a desk and a monitor and a computer that ISN’T hooked to the Internet. That’s where I write. I set the timer on my iPhone and write for designated periods of time.

I tell people they can find the time to write by profiling themselves, a technique I teach in Write It Forward. There are many windows we let slip by. For example, I’m writing this at 35,000 feet over Dallas en route home from the Desert Dreams Conference. I’ve learned to work on planes, in motel rooms and find all the hidden spots with plugs in many airports. My wife told me she can’t remember me ever taking a real vacation in 20 years. I hope to rectify that later this year, but my publication schedule is very tight so . . .

Diane Capri: Readers are the ones who can’t get enough of your books. I see you have the very cool badge for Readers Rule on your website. What’s that about? 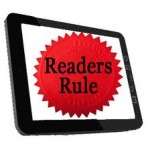 Bob Mayer: It’s a site for authors who have sold over 100,000 eBooks. It’s a badge of being validated by readers. There are so many eBooks out there now, it’s hard for the readers to sift through it all.

Diane Capri: You’ve got a serious military background, including service as a Green Beret. This video shows us a little bit about that work. It seems grueling. How do those experiences inform your writing?

Bob Mayer: Pretty much every one of my books has some sort of military aspect to it. My earliest books were military thrillers. But even my science fiction titles such as Area 51 and Atlantis have a military angle. I just signed a three book deal with 47North for a series called Area 51 Nightstalkers which is about an “enhanced” Special Operations team based at Area 51.

More importantly, my Special Forces background taught me how to operate in an efficient manner. My Write It Forward book and program incorporates many of the Special Forces strategies and tactics into the writing world.

Diane Capri: Now you’re a publisher and an indie author. And who is Cool Gus? That’s not you, too, is it? 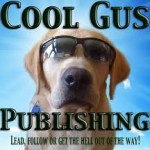 Bob Mayer: My company was originally called Who Dares Wins. But we incorporated this year and found out the British government has trademark on that motto of the British Special Air Service. So we decided to change our name. A trademark name also needs to be non-descriptive, which is why so many companies have odd names. We were casting about, coming up with dozens of possibilities, but then I looked down at my feet and there was the answer as Gus and his niece, Becca were sleeping under my desk. When he has his shades on, he’s Cool Gus. And the other day she chased a fox, which is when she’s Sassy Becca.

Diane Capri: These three indie books look great. How are you finding the indie experience compared to working with the giant international publishers?

Bob Mayer: It’s fantastic. First, being responsible is something I relish. I succeed or fail based on my own efforts, not the capriciousness of a large corporate environment. Cool Gus Publishing is very agile and we are at the cutting edge of digital publishing, at least a year if not two ahead of the Big 6 based on my observations at Digital Book World and following the industry. And in the digital age, a year is an eternity.

I have to be honest and say the money is so much better. I make a “very nice deal” in Publishers Lunch parlance every month. The company just broke seven figures in earnings in 18 months.

Since we’re in charge, we can change quickly. We just changed out the cover for my first Atlantis book and I saw, just on Amazon UK, a $1,000 increase in sales over just last week.

Diane Capri: What’s up next for Bob Mayer?

Bob Mayer: We’re looking for a max of four more authors to join our team this year. Two established fiction authors with the rights to some, if not all, of their backlist. And two speakers with strong platform and speaking engagements who could use books to supplement their program and give them an additional revenue stream. We’re keeping Cool Gus small so we can focus on our authors and selling their books. Because we don’t make money if they don’t make money.

The publishing business is evolving quickly. I think authors have to change to survive. While “brand” authors, those in their publisher’s top 5% will continue to do well, for the rest, the shrinking print book market and the lack of publishers to work well digitally, spells doom for many writers.

Diane Capri: Man, I’ve gotta take a nap! You’re wearing me out! Just one more quick thing before we let you go. Is that you in this photo? 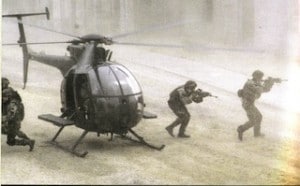 Bob Mayer:  *laughs* Let me cast about in the dark hallways of my mind…I’ve done over 100 parachute jumps—military jumps, always for either pay (jump status) or mission. Never for fun. My jumpmaster class had 86 Green Berets in it and graduated 14, as you had to score 100% on every single test.

I went to the International Mountain Climbing School and graduated, but again, I climbed for mission.

My team went to Royal Danish Combat Swim School and was one of the few teams to have every member graduate. I credit my team sergeant for that.

In other words, I’ve used up most of my adrenaline and now I just celebrated the birth of our first grandson and moved to North Carolina to enjoy our family. It’s great to be able to sit at home and work. Things are good!

Diane Capri: Thanks for joining us today, Bob. I know I’ll see Bob and more of my favorite thriller authors and readers at ThrillerFest. What about those of you reading today? Will you be joining us?

The Writing Life, Snowbird Style
The Invisible Gorilla Experiment and You