So one of my friends is a hunter for sport. And one of the things he hunts is wild boar. Which is interesting, because wild hogs also play a role in Blood Trails the first book in my Michael Flint Heir Hunter Series. (More about how hogs feature in this action thriller here.)

Anyway, this summer, my friend ended up bringing me a tenderloin from an 80 pound pig. I had to look up a good way to cook it — I’d eaten wild boar before (and found it a bit too gamey), but I’d never cooked it myself. After all, it’s not every day I’m gifted with boar tenderloin!

My friend told me the best way to cook it is in the crock pot with chutney. But I learned that there are lots of options. 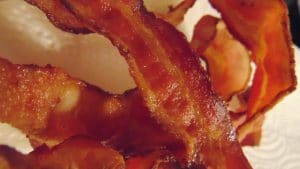 As we know from Blood Trails, wild hogs are smart, aggressive with razor sharp tusks, territorial, can weigh up to 300 pounds, and, in the U.S., wild pigs are an invasive species. We encounter the wild boar in the first book of my Michael Flint Heir Hunter Series, Blood Trails. Flint goes to Texas on assignment, and finds out that wild hogs are capable of ripping flesh and doing serious damage to humans. Any animal that acts like that certainly sounds like it would have a gamey taste!

The good news is that, when cooking, there’s a way to reduce gaminess. According to one experienced boar cooking master, you can reduce gaminess of wild hogs and any other meat by packing it in a cooler of ice for four days with the drain open for water to drain out, then cover the meat with baking soda and water for 24 hours, still keeping it on ice, then rinse it. The gaminess should be gone.

If you’re in a book club, this could be a fun idea for a themed book club meeting. Snack on homemade bacon or simmered tacos while reliving Michael Flint’s dangerous missions in Blood Trails. Of course, you wouldn’t have to use wild boar — many of these recipes could be adapted to other meats. The second novel in the Michael Flint Heir Hunter Series is available to pre-order now, too. (By the way, the books stand alone and need not be read in order.) You can learn more about Trace Evidence here. It’s available in paperback, ebook, and audiobook formats.

Leave me a comment below and let me know if you do themed book club meetings — or if you’ve ever cooked wild boar!

Michael Flint Does the Impossible
Where are you traveling this summer? Take these books with you!