The Threat of Malaria on Jess Kimball’s Journey

By Diane on January 12, 2018 in Beyond The Covers, Blog, Jess Kimball Thrillers

Jess Kimball gave her word to help a friend’s son – and her word is her bond.

Follow Jess Kimball into Spain and Africa in her latest thriller, Fatal Bond, where she encounters threats on her life — and a life threatening disease: malaria, one of the most severe public health problems worldwide.

Malaria is a mosquito borne disease called by a parasite. You can become infected when bitten by an infected mosquito. Malaria feels a lot like the flu — fever, chills, and other flu like symptoms, but even when treated, Malaria can lead to severe complications and death.

Some statistics from the Center for Disease Control: 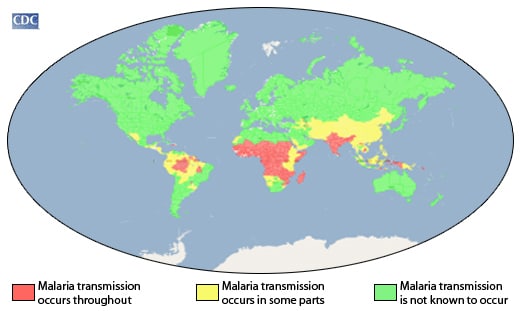 Malaria is most prevalent in Africa- exactly where Jess is headed, but as you can see in the map above, malaria is a worldwide problem. Transmission can even occur via “Airport Malaria” where an infected mosquito hitches a ride via a plane from a country where malaria is more prevalent to an area where it might not be. Malaria has even been transmitted via blood transfusion.

What will happen to Jess in Africa? Check out my Jess Kimball thriller, Fatal Bond, to find out.

The Most Staggering Statistic About Plane Safety
Travel to Spain: The Pleasures and Perils