Whistleblowers In My Latest Thriller Novel

By Diane on November 14, 2017 in Beyond The Covers, Blog, Hunt for Jack Reacher

While on the Hunt for Jack Reacher in my latest novel Jack the Reaper, FBI Special Agents Kim Otto and Carlos Gaspar are also dealing with a document release of classified information regarding the military via TruLeaks, another document leaking source, like Wikileaks. Wikileaks – and TruLeaks — function as avenues for whistleblowers to release classified documents, not in a legal way. Often whistleblowers who fail to follow the law find themselves exiled or in prison.

Wikileaks itself has a varied history. Formed in 2006 under the leadership of Julian Assange, it will not accept rumors or even firsthand accounts. Wikileaks will also not accept documents already published elsewhere.

Wikileaks has hosted a variety of whistleblowers over the years:

“Corruption should definitely be exposed. There are legal ways to do that. I’m in favor of using them. I’m a lawyer. What else would I say?” 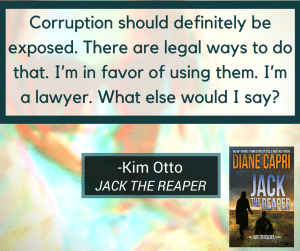 Leave a comment below and let me know what you think about whistleblowers. Should corruption always be exposed or are there times when it shouldn’t be?

Pre-Order Fatal Bond Now, and Get a #Free Bonus Thriller!
A Job in the Treasury Department is Fit for a Thriller Novel?!