Is Reacher dead or alive?

Jack the Reaper, the new release in my
Hunt for Jack Reacher Thriller Series,
is available now!

FBI Agents Otto and Gaspar pick up where Lee Child’s “The Hard Way” leaves off in Diane Capri’s latest thriller in The Hunt for Jack Reacher Series.

But they aren’t the only ones who want to find Reacher this time.

A corrupt Army General is on the hunt, too, determined to make sure Reacher reaps what he sowed.

Reacher’s friends Brewer and Lauren Pauling are in the crosshairs.

When powerful enemies with their backs against the wall will stop at nothing to make Reacher pay, can Otto and Gaspar find the secrets Reacher left behind to keep his friends alive?

Jack the Reaper is now available from all major retailers in ebook, paperback and audio. Here are the links:

“This series keeps you on the edge of your seat. Totally enjoy, the characters are good together. If you haven’t read this series I highly recommend.”

“Great series. I like that each book flows into the next. Continuity!”

“This story will grab you.”

“Diane Capri is doing something amazing here. Her plot lines are complicated but taut and believable. The action is explosive, but the pacing is steady and engaging. What’s so incredible is that she has caused the Reacher universe to expand so seamlessly while remaining true to the original characters and further developing the Reacher mystique. While The Hunt For Reacher series stands imminently well on its own, I’m beginning to see it as an integral part of Reacher’s world enhanced by what’s happening in Child’s novels and vice versa. Recently, I have found myself reading a Reacher book and wondering, “What would Diane Capri do with this character or this development?” I can’t pay a higher compliment than that.”

We’re celebrating the debut of Jack the Reaper with An Exclusive Giveaway!

It’s called The #MidnightLine #JacktheReaper Contest. The grand prize? An exclusive autographed copy of Lee Child’s upcoming new release The Midnight Line, and an autographed copy of Jack the Reaper. Two winners of the two books will be announced in late-November. 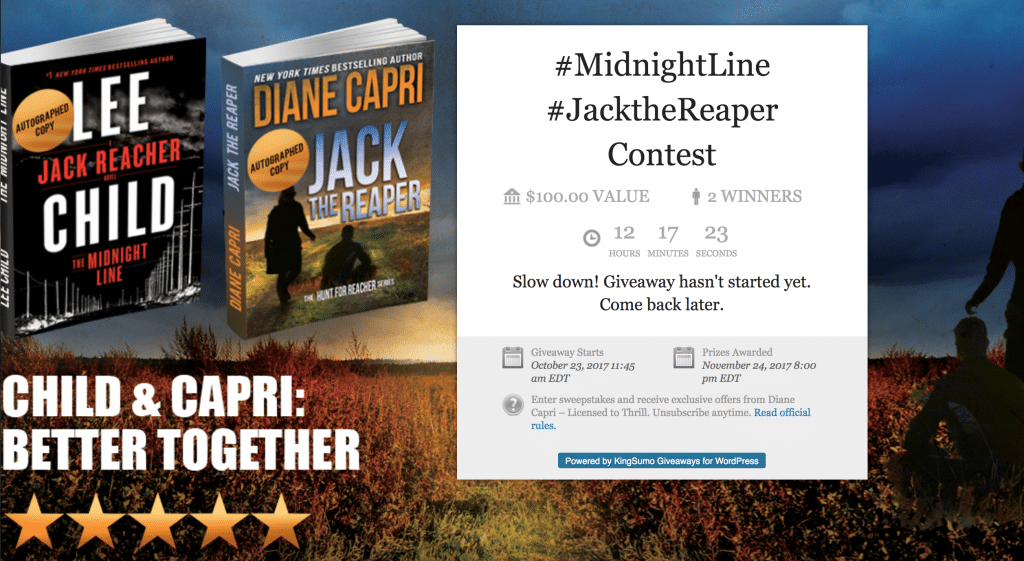