By Diane on August 3, 2017 in Beyond The Covers, Blog, Jess Kimball Thrillers

Did you hear about the new technological development in fingerprints? This one specifically involves infants. 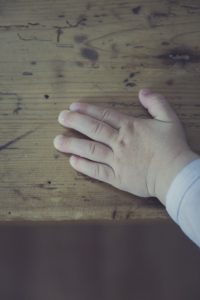 Fingerprints are extremely helpful for solving crimes, and that’s often the reason I research and write about them — both in my books and here on my blog. For example, in my novel Due Justice, investigators dust a doorknob for fingerprints to help solve a murder case. In my thriller Fatal Distraction, fingerprints on paper may help to determine whether a suicide note was written. And in Get Back Jack of the Hunt for Jack Reacher Series, FBI Special Agent Kim Otto notices, “Fingerprint residue blackened the [speakerphone] buttons.” Otto is trying to figure out what crime techs may have discovered about a murder.

But the main reason I’m interested in fingerprints today has to do with missing children.

It’s a theme that pervades my Jess Kimball Thrillers, since Jess’s son was kidnapped when he was an infant.

When a child goes missing, law enforcement agencies have a lot of techniques they can use, like forensics and surveillance. But many of their techniques work better when citizens and even victims’ families can step up and help.

One resource to have on hand is a high-resolution, recent picture of the child. Another is a fingerprint. That’s why it’s helpful for parents to have their children fingerprinted, including newborns. If a child goes missing, whether through a tragic kidnapping, or a hospital mixup (it happens!), it’s helpful if the parent has these resources on file.

Here’s where the big news comes in:

New technology allows babies as young as 6 days old to be fingerprinted. NEC, an IT solutions corporation, recently created a prototype for the first fingerprint scanner in the world that can scan the biometrics of infants. This is groundbreaking because the fingerprints of infants have been notoriously difficult to capture because the ridges and valleys of babies’ fingertips are so dense.

In the case of one Texas baby, it took more than a year to return him to his biological parents after a hospital mixup because the baby’s footprints taken at the hospital were inconclusive. If the baby had this biometric fingerprint scan done, the process of returning him might have been much faster.

While we wait for this technology from NEC to become readily available, the FBI encourages parents to use ID kits for their children, which includes a fingerprinting kit (though not nearly as accurate as the new ones being developed) and a DNA sample.

In the meantime, Jess Kimball’s tireless work may lead to answers in the case of her own missing child.

Peter was kidnapped as an infant when Jess was little more than a child herself. Now, she channels her will to find answers into her work as an investigative journalist for Taboo Magazine. She’s gotta make a living. Working for victims’ rights helps her and others like her. And someday, her work may lead her to Peter.

And The Next Hunt for Jack Reacher Book Is….
Enter to Win 100 Free eBooks On Goodreads